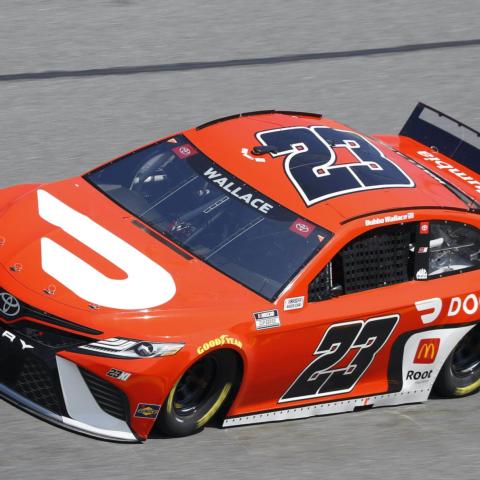 Bubba Wallace has had an up-and-down first season with 23XI Racing, a new team owned by Michael Jordan and Denny Hamlin. HHP/Harold Hinson

It started as a rumor: NBA legend Michael Jordan and star NASCAR driver Denny Hamlin are teaming up to purchase Richard Petty Motorsports.

That rumor ended up being bogus, but it directly led to the formation of one of NASCAR’s newest race teams.

“There was an article that got put out saying that Denny Hamlin and Michael Jordan were looking to purchase a stake in a race team,” Hamlin said during an interview with FOX Sports. “I thought, should I send this to him or not? I don’t want to rub him the wrong way, but I just sent it to him.”

Hamlin treated the situation as a bit of a joke between two friends, but Jordan took it seriously. Within 24 hours, Hamlin had flown to Florida to meet with Jordan. An agreement was soon reached and a new NASCAR race team began to form.

It wasn’t long before Hamlin and Jordan needed to find a driver for their new race team, which was given the name 23XI Racing. The choice ended up being NASCAR’s only full-time African American driver, Bubba Wallace.

“It’s kind of surreal to see, you know, where we’re at and how far everything has come in such a short amount of time and having the right people in the right place,” Wallace said. “We still have a lot of work to do.”

The move to 23XI Racing was a big one for Wallace, who up until this season had spent his entire NASCAR Cup Series career driving for Richard Petty Motorsports. In that time, he’d seen flashes of brilliance, including a runner-up finish in the 2018 Daytona 500.

However, Wallace was unable to replicate the success he enjoyed in the NASCAR Camping World Truck Series where he earned six victories. This new opportunity at 23XI Racing, which has a technical alliance with Joe Gibbs Racing, has presented Wallace with an opportunity to truly showcase his ability.

The start of the season hasn’t been perfect. Wallace admits the team has made its fair share of mistakes, either on pit road or on the race track. Still, the car has had speed each week and Wallace is consistently running in or near the top-10 despite not having a top-10 finish through the first third of the season.

Wallace earned the first stage victory of his career at Talladega Superspeedway on April 25, and he’s led more laps this season than he’s led in his Cup Series career. The pieces are coming together.

“It’s a matter of we’re a 15th-place car. OK, good, that’s better than I have been,” Wallace said. “I’ll take that for a mental confidence standpoint for sure. Now, it’s like we’ve got 14 spots to go. That’s huge for me. That’s what we’re working on, little things.”

Wallace believes addressing those little things is the key to go from running 15th to running in the top 10 and, eventually, contending for victories. He’s hopeful that when he and 23XI Racing arrive at Charlotte Motor Speedway for the 62nd running of the Coca-Cola 600 that they’ll have begun to show the program’s full potential.

“I’m excited because I don’t know. The unknown is exciting,” Wallace explained. “I don’t know if I’m the only one in that category who gets excited about not knowing what the hell is going to happen, but I’m excited because Charlotte is a good track for me. We ran good in the past there with what I’ve had.

“Seeing that Toyota has been really strong these last handful of years, it just brings that extra level of confidence,” Wallace continued. “Things are starting to click for us in the right direction, so it’s only a matter of time and Charlotte could be the one.”

Charlotte has always been a good track for Wallace, who began racing at the venue in Bandoleros and Legend Cars, years before he became a NASCAR star. The chance to perform and produce a good result at a track so near and dear to him would mean everything.

“It’s just surreal to sit there and think about. Charlotte’s home for me and I’m looking to do some good things that weekend.”

About the Writer: A 2007 graduate of the University of North Carolina at Pembroke, Adam Fenwick is the news director for SPEEDSPORT.com and SPEED SPORT Magazine.