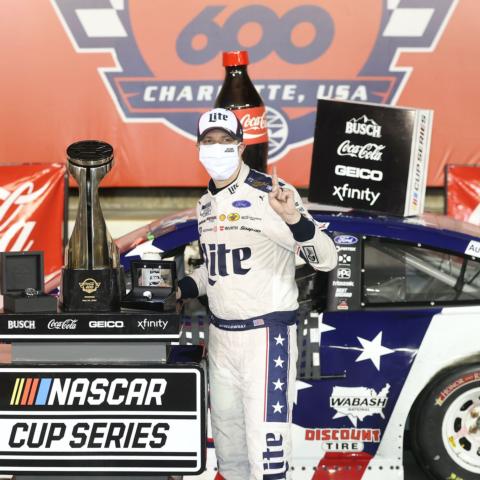 NASCAR's longest race came down to less than three miles as 2012 Cup Series champion Brad Keselowski needed overtime on May 24, 2020, at Charlotte Motor Speedway to win his first Coca-Cola 600.

Hendrick Motorsports seemed to have the cars to beat as NASCAR kicked off the first of four consecutive days of racing at the 1.5-mile superspeedway. Alex Bowman led a race-high 164 laps early, and Chase Elliott seemingly had the race in hand with only two circuits remaining. However, a spin by Hendrick driver William Byron brought out the night’s final caution flag and ultimately ended the team’s chance at victory.

Opting to pit before the final restart, Elliott fell out of contention as he restarted 11th. That left Keselowski to battle Jimmie Johnson for the victory.

“Chase was really, really strong,” Keselowski said. “I was thinking, ‘I hate I’m going to finish second; I just need a break.’ Then the yellow came and it all came together. I’m so thankful to finally be able to win this race.”

As has become tradition, the 36-year-old Keselowski carried an American flag as he executed his celebratory burnout – fitting since he also carried a stars-and-stripes paint scheme on his Team Penske entry in honor of Memorial Day Weekend.

“This is a special day,” said Keselowski, who finally won the Coca-Cola 600 in his 11th try. “Memorial Day is racing. There will always be a close connection.”

Keselowski’s No. 2 Miller Lite Ford was 0.293 seconds ahead of Johnson’s No. 48 Ally Chevrolet, but Johnson was moved to last in the final 40-car rundown after his car failed post-race inspection due to an alignment issue.

The 61st running of the Coca-Cola 600 was held without fans in the grandstands as Americans continued to deal with restrictions due to the COVID-19 pandemic.