Alsco Uniforms 300: Finally, Daniel Hemric Has 'A Shot to Win Each Week' 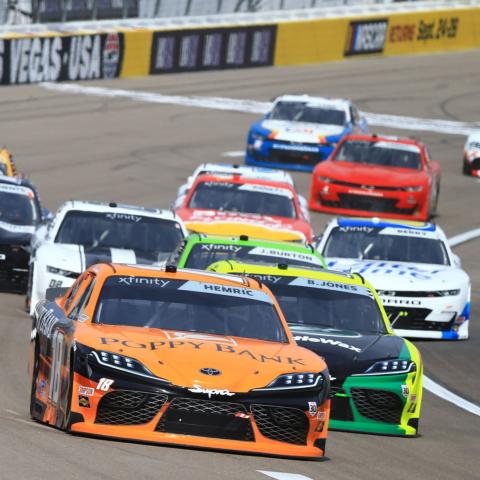 A less motivated person would have given up a long time ago, but Daniel Hemric has proven time and time again just how motivated he is.

The 30-year-old native of Kannapolis, North Carolina, continues to chase success in NASCAR. His constant pursuit has taken him this season to Joe Gibbs Racing, one of NASCAR’s top teams, where he is racing full time in the NASCAR Xfinity Series.

“It truly has been rejuvenating to be honest with you,” Hemric said about joining Joe Gibbs Racing. “I’ve had an opportunity to race against Joe Gibbs Racing in the past in the Xfinity Series and at the Cup level. You see how they go about their business, and how they go about executing a weekend from beginning to end and you always wonder, ‘Man, I wonder what that’s like.’

“Now to be a part of the fold, to be completely immersed into the Joe Gibbs Racing family and to see all the tools that Toyota Racing Development provides the teams, the drivers, the resources we have at our disposal was truly incredible.”

The opportunity with Joe Gibbs Racing is one Hemric knows could make or break his racing career, a career that has resembled a roller-coaster ride.

Hemric has spent his years bouncing from race team to race team, always seeming like he is on the cusp of something great, only for things not to work out. Prior to this season, Hemric had made 175 starts across NASCAR’s three national series and he had yet to find Victory Lane.

Hemric finished third during his last full-time Xfinity Series season in 2018 while driving for Richard Childress Racing despite going winless. The following season he was promoted to the NASCAR Cup Series by RCR but struggled for consistency and was released at the end of the season after only two top-10 finishes.

Those struggles, Hemric believes, better prepared him for the opportunity he has now with Joe Gibbs Racing.

“You don’t get the full perspective from the view that I feel like I’ve been fortunate to be able to view it all from unless you went through those (tough) times,” Hemric explained. “Until you go through that you just don’t know. Going through those things I promise you makes your skin a lot thicker, makes your emotional, mental spot better and more efficient. You’ve got to learn how to deal with it.

“Without going through that stuff I don’t know that you’re fully prepared for what’s ahead.”

Thus far, Hemric has shown he was prepared for the opportunity with Joe Gibbs Racing. Through nine races Hemric had earned five top-five results and seven top-10 finishes, including a runner-up at Las Vegas Motor Speedway in March.

He’s running up front consistently and has led laps in almost every race so far this year, which further motivates Hemric to keep pushing himself to improve. Victory Lane is so close he can practically taste it.

“This is what I’ve still been chasing. This is why I get up every day grinding it out,” Hemric said. “I wake up every day thinking I’m the luckiest guy in the world to get to drive a race car for a living and to have my family, fans, friends and everyone supporting me, and we’re going to the race track with a shot to win each week.”

Charlotte Motor Speedway would be the perfect place for Hemric to rise to the challenge. Not only is it his home track, it’s a place where he enjoyed considerable success early in his career. He earned countless Legend Car wins on Charlotte’s frontstretch quarter-mile oval, including a victory in the Legends Million in 2010.

To add a victory in one of NASCAR’s top divisions on the historic 1.5-mile superspeedway would simply be the cherry on top for Hemric. He’ll have the chance to do that on May 29 during the Alsco Uniforms 300.

“I’ve had it circled as I want to be able to go win around this weekend,” Hemric said of the Charlotte race weekend. “Not saying it’s that weekend or before that weekend, but I think as a team we are ready now. We’re going to be that much more prepared come time to roll into our hometown race at Charlotte.”

About the Writer: A 2007 graduate of the University of North Carolina at Pembroke, Adam Fenwick is the news director for SPEEDSPORT.com and SPEED SPORT Magazine.