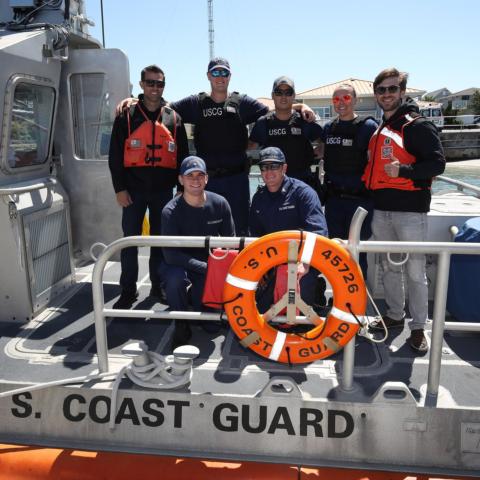 Coca-Cola Racing Family driver Daniel Suarez may be chasing his first NASCAR Cup Series victory this season, but Tuesday he traded driving gloves for a life preserver as part of Charlotte Motor Speedway’s Mission 600. The driver of the No. 99 Trackhouse Racing machine joined his crew chief, Travis Mack, at U.S. Coast Guard Station Wrightsville Beach for a day of hands-on training as a prelude to the Coca-Cola 600 on Memorial Day weekend at America’s Home for Racing.

Suarez and Mack toured the station, met New Hanover County based crew responsible for patrolling and protecting coastal North Carolina waters and even got under way on one of the station’s 45-foot RBM (Response Boat – Medium) vessels to simulate a water rescue. Suarez threw a tow line to a 29-foot cutter that was “beached” in shallow water and in need of a pull back into the channel.

The NASCAR teammates also assembled a portable pump unit designed to remove fluids from an engine room that is taking on water. Suarez drove the 45-foot RBM as part of Charlotte Motor Speedway’s Mission 600 campaign, a program designed to highlight the mission capabilities of our U.S. service men and women and draw some comparisons to the NASCAR drivers where common themes exist amongst teamwork, execution and equipment.

“I have a lot of respect for these guys,” Suarez said. “The routine that they have and everything they do for people is very special in the way they keep people safe. (Driving a boat) was quite different than a car. It was a lot quicker when you went in reverse (as opposed to) going forward. Those boats are so strong. There’s a lot of power with two diesel engines. I was able to try them out, which was right in my wheelhouse. It was a good time and I enjoyed it.”

Senior Chief Boatswain Mate Jason Miller, the officer-in-charge at Coast Guard Station Wrightsville Beach, appreciated the Mission 600 visit and the opportunity to put the Coast Guard’s responsibilities on display for a unique audience.

“It’s a cool thing to have that attention paid to the Coast Guard and to be featured like this, showing people what we do on a daily basis,” Miller said. “It was really neat to get Danny out there and to show him an idea of what we do and to give him a feel for a mission.”

While Mack is accustomed to sitting atop the pit box and calling the shots for Suarez on race weekends, he played a new role during Tuesday’s visit: passenger aboard a boat Suarez was piloting.
“I kept my hand on the railing just to be sure, because he started making some aggressive maneuvers, but it was really cool,” Mack said. “It’s been a great experience, seeing the ranks of the military and how they do each operation. I’ve learned a lot about the Coast Guard, the waters they have to patrol and the amount of time and sacrifice they have to make it amazing.

“Hopefully, we can take something from this day and apply it to our race team and make it better. It’s really cool that we get to cross paths with the military and that we get to have these experiences and see how the Coast Guard operates.”

“I’m very happy to be here and I’m thankful for everything the (service) men and women do for us,” Suarez said. “I’m happy to be able to recognize them and to be a part of the Coca-Cola 600. It’s such an amazing race and it means a lot.”