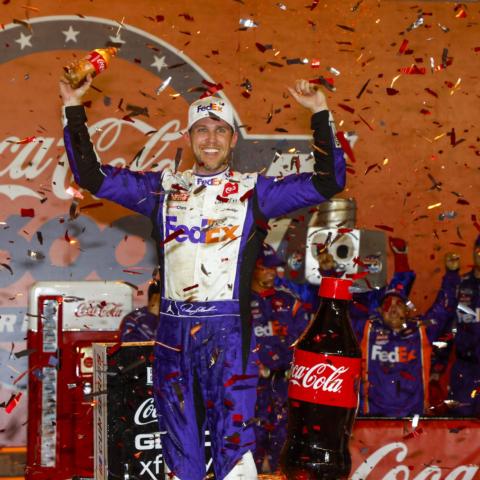 More than five hours after the green flag and more than 16 years after his first Coca-Cola 600 start, Denny Hamlin finally left Charlotte Motor Speedway as a winner on Memorial Day weekend.

Hamlin won the pole for Sunday's 63rd running of NASCAR's toughest test of man and machine – and, after an action-packed, unforgettable race from start to finish, the veteran driver added one of racing's most treasured victories to his resume.

The ensuing restart saw Larson pull out front before Austin Dillon, the 2017 race winner, moved from fourth to challenge Larson as the leaders approached the white flag. Hamlin dove beneath both drivers as Dillon slid into Larson and the two triggered a multi-car crash, which brought out another yellow flag.

Hamlin seized his opportunity on the restart. He withstood a last-gasp challenge from teammate Kyle Busch, and after waiting since May 28, 2006, for his first Coca-Cola 600 victory, the outspoken title contender finally had his coveted win – with an interim crew chief.

Sam McAulay, a Joe Gibbs Racing engineer, called the shots for Hamlin atop the No. 11 pit box as regular crew chief Chris Gabehart served the first of a four-race suspension, stemming from a rules violation at Dover Motor Speedway.

The staffing change didn't upset Hamlin or his team's positive momentum, with Hamlin securing his second consecutive top-five finish for the first time this season.

Elliott's hopes of collecting his famous family's first Coca-Cola 600 win ended shortly before halfway, when he was knocked out of contention in a multi-car accident preceding the finish of Stage 2. Elliott led 86 of the 188 laps he completed.

While Hamlin bided his time for much of the evening – leading only 15 laps – Suarez replaced Elliott as the front-running favorite. The Trackhouse Racing driver paced the field for 46 circuits before an accident on Lap 346 eliminated Suarez and saw Chris Buescher's car flip end-over-end in a wild accident. Buescher left his car under his own power and was checked and released from the infield care center.

Hamlin found himself in the driver's seat as the laps wound down, largely by avoiding the trouble which befell so many of the contenders.

The win was the 48th of Hamlin's career and his first points-paying NASCAR Cup Series victory at America's Home for Racing.

DENNY HAMLIN, No. 11 Joe Gibbs Racing Toyota (Race Winner): “It feels great, obviously. It wasn’t looking good for about 338 laps. Considering our day, I was going to be pretty content with a fourth-place finish. I just knew with that No. 1 pit stall, we’d have an opportunity if everyone pitted, of coming out first. We didn’t, but we were the first car on four tires and it just worked out. Things worked out for us and they hadn’t worked out well in the first 12 races, in a lot of different ways. Certainly this one was one where we capitalized on an opportunity. We managed the race. We knew we didn’t have the fastest car by any means, but we just stayed in the race and didn’t make any mistakes. We gave ourselves an opportunity to win when the opportunity arose for us.

"I’m not near the end of my career by any means, but this certainly is one that I needed on the resume. When you’re done and you’re looking at all your accolades, the Coke 600 is way up there. I hadn’t won it until today, so it means a lot."

JOE GIBBS, No. 11 Joe Gibbs Racing Toyota (Winning Car Owner): "I've always said I'm most nervous when two of our cars are up there late. Both of them wanted it so bad. Your greatest fear is your two cars getting together. That race, I don't know how to explain it, really. There's so much in it. I guess I'll have to use a football term: that was physical. There were people pounding on each other. I'm really, really proud. Kyle gave it everything, there were two cars up there like that at the end. It's really special. That pit crew, they were incredible. Two of those (No. 11) guys, that's the second time they ever went over the wall."

SAM MCAULAY, No. 11 Joe Gibbs Racing Toyota (Winning Crew Chief): "We really did a lot of pit practice this week. They did a great job all night. They had a lot of hours put in, a lot of reps put in. Then, on the car side, our main focus was just bringing the best car we can, like we always do. Getting the pole was something we were definitely working on. That was definitely major tonight. That helped the mindset of knowing, 'Hey, we have an advantage here.'"

KYLE BUSCH, No. 18 Joe Gibbs Racing Toyota (Runner-Up): "Just not very good performance overall. We struggled really bad all night long, so we gave it everything we had there. It was pretty remarkable even being in position to race for a win there at the end. We'll take that, but we certainly didn't run there."