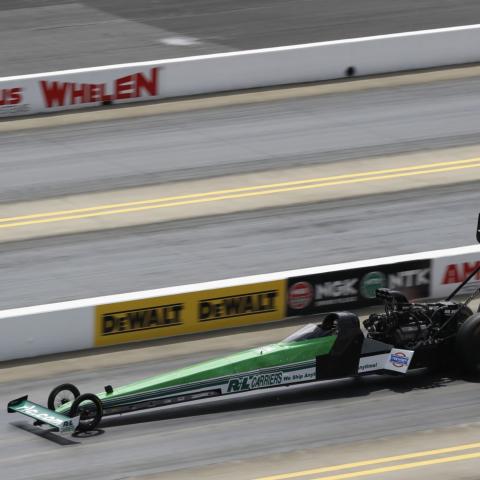 Brittany Force and Steve Torrence were overwhelming favorites to win the Top Fuel portion of Sunday’s DEWALT NHRA Carolina Nationals at zMAX Dragway, but both title contenders took a backseat to a driver with one victory in seven career starts.

Josh Hart – a part-time driver who didn’t qualify for the Countdown to the Championship – advanced to Sunday’s final round to meet Force, who took the Top Fuel points lead when she advanced past Torrence in the semifinal. Hart promptly knocked Force off the zMAX Dragway pedestal, shocking the crowd with a 3.770-second, 324.12-mile-per-hour run in the final round. Hart’s run eclipsed Force to  capture his second career win and his first at the Bellagio of drag strips.

“We never really planned on doing a full season this year,” Hart said. “We just wanted to get our feet wet and just build the team. That’s obviously accelerated, with us moving the team to Indianapolis and getting more parts, and the results are showing. The real magic happens in the pits – not on the track. Those (crew) guys are awesome. It’s like watching a controlled symphony. They’re the ones who deserve the credit. I’m glad to just return the favor for them.

“(Force) has a great team, obviously, but so do we. She’s beaten me twice. I guess the third time’s the charm.”

Tim Wilkerson bagged his second Funny Car win in the last three races with a 3.927-second, final-round pass at 331.36 miles per hour, besting Cruz Pedregon in the final round.

“I’m proud of my guys. We were thrashing because we had a short crew,” Wilkerson said. “We’re down a few people, so we had to really dig in this weekend. I’m worn out. It was a tough day, but it feels good. … Today, I made wholesale changes (to the car), and it worked out. … It’s very exciting, winning races as a small, one-car team.”

“This means the world to me. Every win is special,” said Koretsky, the son of former Pro Stock racer Kenny Koretsky. “Pro Stock is the most competitive class out there in NHRA. … I just wanted to keep my cool and just race every round. I just defeated Greg Anderson, who’s going for the win record. I feel kind of bad, beating him, but winning this race is big for my family. This is the first Wally for my family.”

Pro Stock Motorcycle racer Cory Reed went for a wild ride during Sunday’s eliminations, when his motorcycle drifted right and out of control, clipping Joey Gladstone’s front tire and sending Reed and his bike into the wall at high speed. Reed was conscious and examined by the NHRA medical team and was transported to a local hospital for further evaluation.

His crash – plus Gladstone’s kill-switch problem keeping him from winning the final – made Sampey put her victory into perspective.

“First and foremost, I thank God that Cory Reed is OK,” Sampey said. “This is definitely for the first parish and everyone of Louisiana. It’s a very emotional day. I feel bad for Joey – he did a great job, but he had some bad luck and I don’t like to win them that way, but sometimes, drag racing is more about luck than skill, and you get to come away with a Wally.”