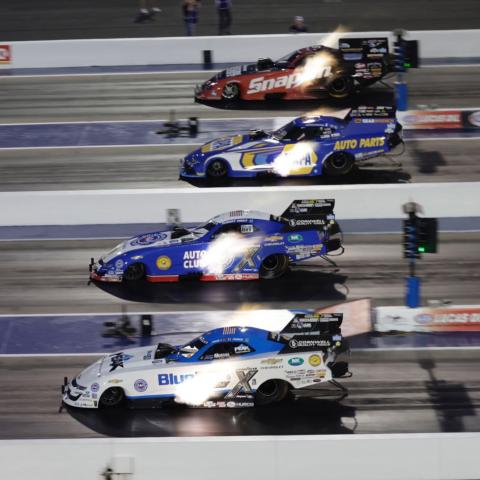 John Force’s bid to outshine his victory in last year’s Funny Car portion of the Circle K NHRA Four-Wide Nationals got off to a great start on Friday. The 16-time World Champion’s second qualifying run scorched zMAX Dragway’s pavement to the tune of 334.24 miles per hour in 3.850 seconds – both track records.

Force’s speed, which came in the second round of qualifying, shattered a zMAX record across all Nitro classes, while his elapsed time eclipsed daughter Courtney’s 2017 Funny Car run by 0.001 seconds.

“It was straight as an arrow,” said Force, whose speed topped Jack Beckman’s 2019 run by 0.17 mph. “I thought it might get loose on me, but it stuck. That Chevrolet has some really good aerodynamics. It was like I had power steering, the way it drove for me. I talked to my son-in-law, (crew chief) Daniel Hood, and told him we needed to dial this thing back a bit. He said he dialed it back a bit, but the cool air tuned it up.

“It was a good night for my team. I’m driving it right down the groove. I’ve got my stuff together. (Saturday) is a new day. (Faster speeds) are out there. (Ron) Capps, Robert Hight, those guys are going to chase it. But it’s exciting for me. Just to be in the hunt is exciting.”

“That would be great,” Ashley said. “We’ve been fortunate to accomplish a lot in a short period of time, but one thing we’ve not had yet was to get a No. 1 qualifier and now, we’ve got a shot at that. We’re going to keep our foot to the floor and keep at it.

“This was smooth, this was straight. It felt good. A night like that, I can’t wait to go back and look at the video. To see that No. 1 spot was a really good feeling not only for me, but for the guys who work on this car. They deserve it.”

“The bike was good, but if I’d have ridden it better it’d have gone even faster,” Johnson said. “Our bikes nowadays are very, very challenging to ride now, but I think we’re in a new realm (of speed and elapsed time). There is a lot of stuff going on in six-and-a-half seconds: shifting, moving your body, going through the bumps. It’s a lot of work to ride it perfectly.”

The Circle K NHRA Four-Wide Nationals continue on Saturday, setting the stage for white-knuckled, edge-of-your-seat eliminations on Sunday. Every ticket is a pit pass, giving fans unmatched access to the drivers and crews who tame the 11,000-horsepower machines and push them to their limits after the tree illuminates.