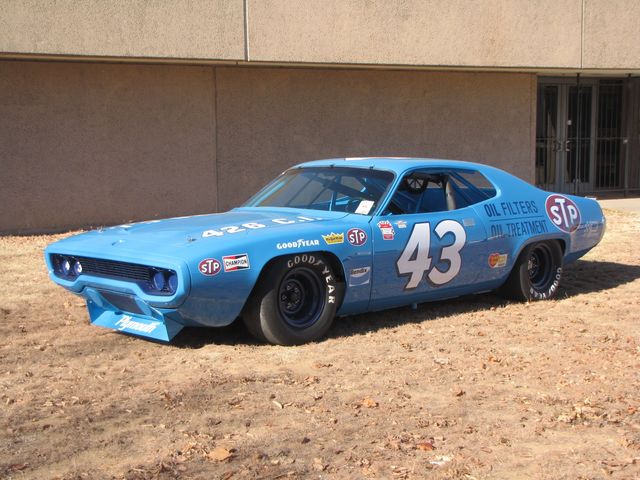 This 1971 Plymouth Roadrunner, driven by Richard Petty, will be one of many cars in the NASCAR Hall of Fame display. Brent Hajek

Automobile and racing enthusiasts will get the exclusive opportunity to view the iconic cars of NASCAR Hall of Famers during the Sept. 24-27 AutoFair at Charlotte Motor Speedway. Historical vehicles driven by "The King" Richard Petty, Rusty Wallace and Dale Earnhardt will be among the many cars displayed in the Nationwide Showcase Pavilion.

Known for driving the iconic black No. 3, Earnhardt, a 2010 NASCAR Hall of Fame inductee, actually raced the No. 2 for several years early in his career. To pay homage to the mark the "Intimidator" left on the sport, AutoFair will host the No. 2 Wrangler Pontiac Grand Prix he raced during the 1981 season. The short-track/road course car ran several times in 1981, when Earnhardt drove for Rod Osterlund, before being sold to a racer on the west coast. After being found again in 2013, the car was restored by Rhine Built in 2014.

In addition to being tied with Petty for the most NASCAR Cup championships, Earnhardt had a total of 676 starts and 76 points-paying victories during his lifetime, five of which were won at Charlotte Motor Speedway. This year marks the 35th anniversary since Earnhardt's first win at the speedway in the 1980 Bank of America 500.

Bill Elliott, father of up-and-coming NASCAR star Chase Elliott, is a recent 2015 inductee. The former driver, known as "Awesome Bill from Dawsonville," wheeled a 1987 Ford Thunderbird once upon a time that will grace AutoFair's Nationwide Showcase Pavilion. Elliott, who was named one of NASCAR's 50 Greatest Drivers, had a 37-year driving career with a total of 828 starts, 175 top five finishes and 44 wins. Two of his career points-earning wins took place at the famed Charlotte Motor Speedway.

David Pearson was inducted into the NASCAR Hall of Fame in 2011. Throughout Pearson's 27 year career, he had a total of 574 starts, 105 wins and 113 Poles, and earned the Rookie of the Year award in 1960. The 1971 Wood Brothers No. 21 Mercury Cyclone will be on display representing Pearson's career. This historical vehicle won 11 of the Wood Brothers' 19 victories during the 1972-1973 seasons with Pearson behind the wheel. The car was also driven by Cale Yarborough.

Another stock car driven by 2012 inductee Yarborough will join the display during the Sept. 24-27 event. The 1977 Oldsmobile, owned by fellow Hall of Famer Junior Johnson, had four wins in 1979 and six wins in 1980 with Yarborough in the driver's seat.

Three Ford Galaxies' driven by Glenn "Fireball" Roberts' in 1963, Fred Lorenzen in 1965 and Wendell Scott in 1966, plus a 1994 No. 2 Ford Thunderbird driven by Wallace, are also among the wide array of historical vehicles to be displayed.

AutoFair is open from 8 a.m. to 6 p.m., Thursday through Saturday, and 8 a.m. to 4 p.m., Sunday. Tickets are $11 for adults (including tax) and free for kids 13 and under with a paying adult. Parking for the event is $5. For tickets or additional information about AutoFair, call 1-800-455-FANS (3267) or visit the Charlotte Motor Speedway website.

As part of NASCAR's revised 2020 schedule in response to the COVID-19 pandemic, the Alsco 500 NASCAR Cup Series Race has been scheduled for May 27 and will take place without spectators. Fans are invited to tune in to the live televised broadcast on FS1  at 7:00 p.m. or listen on a local PRN affiliate radio station.