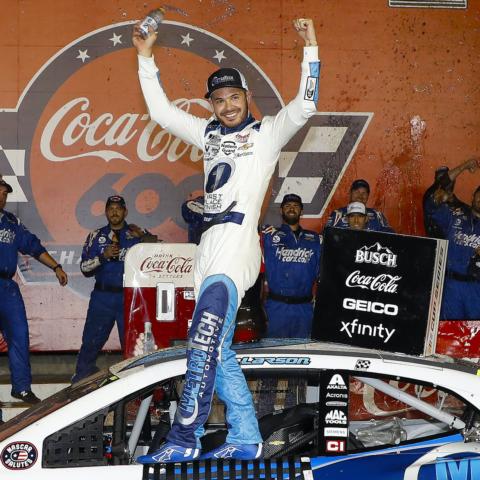 Kyle Larson left no doubt as to who was the man to beat in Sunday's Coca-Cola 600 at Charlotte Motor Speedway.

One day after winning the pole for the Memorial Day Weekend spectacle, Larson led 327 of 400 laps and rocketed to victory on a historic night for Hendrick Motorsports.

Larson's win delivered Hendrick its record-breaking 269th NASCAR Cup Series victory as a team, while all three of Larson's teammates also finished in the top five. Chase Elliott was second, while Kyle Busch's Toyota broke up the Hendrick party in third.

Larson won all four stages and collected the eighth Cup Series win of his career at the track where he made his debut in October of 2013. The 28-year-old Californian notched the 12th Coca-Cola 600 victory for Hendrick Motorsports and the team's first since 2014.

KYLE LARSON, No. 5 Metro Tech Chevrolet (Race Winner): "My car was really, really good. I didn't have many complaints but with the grip in the track, my teammates were just as good as I was. It was much harder to fight them off than it was at Las Vegas, Kansas or places like that. I felt like I was on defense for most of the race. Finally, in that last stage, I was able to stretch out and relax a little bit. Before that, I wasn't able to relax at all. ... The No. 1 pit stall really helped in our pit stops and in beating cars off pit road during cautions. Winning the pole really helped us win the race tonight."

RICK HENDRICK (Winning Team Owner): "I really wanted to break the record at home. I really wanted to do it at Charlotte. When the race started and it looked like we were going to be really strong and all of them were in the top five, I felt like we had a good shot at it. ... It's huge for our company to win 269 races."

CHASE ELLIOTT, No. 9 NAPA Auto Parts Chevrolet (Runner-Up): "The best car and the best driver won tonight. I think, for us, we just look ahead. I'm excited for our opportunity. That's all you can do when you get beat: just look ahead."