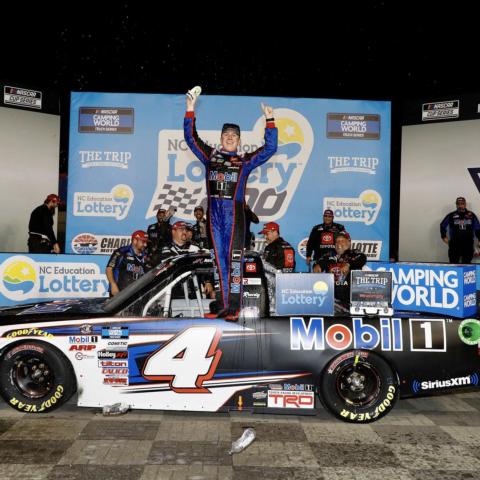 Nemechek led 71 of 134 laps and held off Carson Hocevar over the final 10 circuits to score his first Truck Series win at Charlotte and Kyle Busch Motorsports’ seventh.

Sheldon Creed controlled Stage 1 and appeared poised to challenge for the win before an accident ended his race with 79 laps to go. Zane Smith claimed Stage 2.

JOHN HUNTER NEMECHEK, No. 4 Mobil 1 Toyota (Race Winner): “We started the day hitting the fence in the third lap of practice and we had to fix our truck. Overall, the team did an awesome job repairing it. … We had a dominant truck, I feel like. I’m just proud to be able to drive these Kyle Busch Motorsports trucks. Overall, a solid victory. It’s nice to get our third win. I’m just thankful for all my guys and blessed to be part of this organization.”

CARSON HOCEVAR, No. 42 Scott’s/GM Parts Now Chevrolet (Runner-Up): “We’re starting to hit our strides at the right time. It’s getting close to crunch time – close to Playoff time. It’s just about me not making those rookie mistakes, those crucial mistakes, and ironing out things. This stuff is hard. You don’t expect to run that good, especially as good as we did at Darlington and now at Charlotte. We’re starting to hit it again. It’s just about inching forward, not taking big swings.”