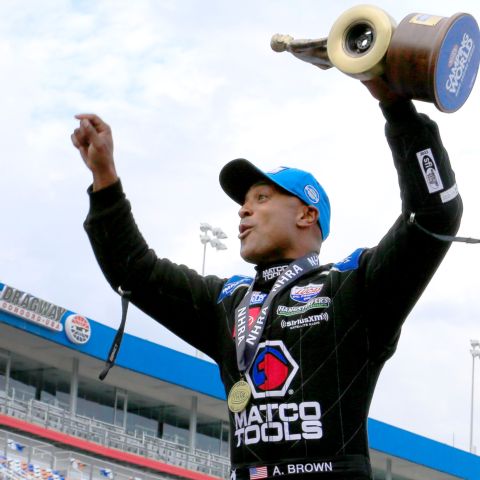 Antron Brown hadn’t won at zMAX Dragway in six years, but the three-time Top Fuel champion reset the counter after a brilliant run in Sunday’s final round of the Betway NHRA Carolina Nationals.

Brown blitzed Charlotte’s pavement with a 3.672-second, 335.73-mile-per-hour run — enough to edge No. 1 qualifier Justin Ashley by .0195 seconds. The win was Brown’s sixth at the Bellagio of drag strips and a much-needed boost in Brown’s bid for a fourth title in the Countdown to the Championship.

“We didn’t qualify where we wanted to qualify, and we knew we had to run better,” said Brown, who won for the third time in the last four races. “We’ve been working on it. Justin Ashley’s been on it lately and he was quick all weekend.

“We’re just raising the level because we’ve got to step it up. Justin’s the toughest competitor out there, hands down. If you asked any driver out there, ‘Would you want to face Justin Ashley?’ Every single one would say, ‘No.’ I had to pull out every trick in the book to win this weekend. This is so special, because this is a win for our race team, and our race team is a family."

Ron Capps made it a nitro sweep for Toyota on Sunday, matching Brown’s Top Fuel win with a Funny Car triumph. Capps, a two-time NHRA Funny Car champion, used a 3.967-second, 267.32-mph run to top Alexis DeJoria in the final.

Capps’ engine blew before he crossed the line, but the blue NAPA Auto Parts car retained just enough speed to win the race and move to within 27 points of Robert Hight’s Funny Car points lead.

“(DeJoria) had just been so good all weekend but I didn’t want to be her fourth victim (in eliminations),” Capps said. “It was going along well (in the final round), then it started grinding and it just quit. I coasted through, my light went on and she went whizzing by me, coasting. I was like, ‘I don’t even know what happened, but this is going to be cool to see later on.’

“I just want to get back in the fight. You have to hope somebody has bad luck, which is unfortunate, but that’s the way it is. When you lose (in the Countdown to the Championship), I assure you that every other mechanic out there is celebrating. That’s just how it is. It’s fun to be right back in it.”

Aaron Stanfield held off Matt Hartford to score his third Pro Stock victory of the year after a 6.567-second, 210.21-mph pass in the final gave Stanfield a win by .0285 seconds.

Stanfield entered Sunday’s eliminations ranked fifth in the championship, but gained significant ground after the win.

“We wanted to turn things around this weekend, and we did,” Stanfield said. “Our hot rod was running well all weekend. I’ve been racing for a little bit and every time I focus on points, I start to think about it (too much). I just want to do well, keep getting results and keep winning races.”

“All of (Smith’s) facilities are top-notch and it’s always a pleasure to get to race here,” Stanfield said. “The fans were fantastic this weekend.”