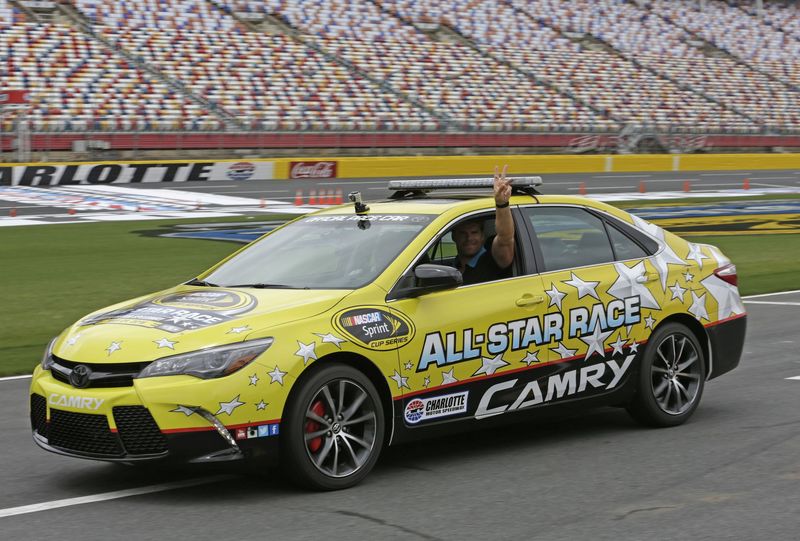 Olsen has attended NASCAR events at Charlotte Motor Speedway for the last two years, but nothing compared to the thrill he received when, after learning the ropes from DiBenedetto, he climbed behind the wheel of the Toyota pace car with Bodine riding shotgun.

"Last year, I was able to come to the NASCAR Sprint All-Star Race and kind of experience and get a feel of how fast they're going," Olsen said. "I don't think you ever really appreciate it until you're actually down there in the action. I'm sure this is going to be even closer to the action now that I'll have a lot of guys racing for $1 million on my bumper and waiting for me to get out of the way. I'm really excited to be part of such a special event."

MORE INFO:
Olsen earned his second Pro Bowl nod after recording a career-high 1,104 receiving yards and seven touchdowns last season. Olsen's efforts helped the Panthers finish with a franchise-best 15-1 record in a season that also saw Carolina advance to Super Bowl 50. Olsen joins Carolina linebacker Luke Kuechly as the second Panthers player in the last three years to pace the field prior to the NASCAR Sprint All-Star Race. Without the aid of cruise control on Wednesday, Olsen had to work both pedals on his own. "He did really well," Bodine said. In addition to his driving prowess, speedway officials presented Olsen with a unique keepsake: a Max Papis Innovations steering wheel to commemorate his pre-race duties for the NASCAR Sprint All-Star Race.
DiBenedetto hopes to be another major player in Saturday's thrilling event, with the BK Racing driver ranking in the top five of the Sprint Fan Vote - of which the top two vote getters advance to the NASCAR Sprint All-Star Race to race among the best drivers in the sport. He gained some extra practice when he took Olsen around the track at full speed.
"We're very fortunate to be in the top five, so hopefully everyone will continue voting," DiBenedetto said. "If we don't race our way in, it would be a heck of an honor to get the fan vote. It would be great to run in a race I've dreamed of racing in since I was old enough to watch NASCAR."

TICKETS:
Weekend passes for the 32nd running of the NASCAR Sprint All-Star Race at Charlotte Motor Speedway start at just $99 and include admission to the May 20 Sprint Showdown and North Carolina Education Lottery 200, a pre-race concert featuring triple-platinum recording artist Andy Grammer and a great view of no-speed-limit qualifying. To purchase single-day tickets to the NASCAR Sprint All-Star Race and Mega Passes, camping and race-day upgrades to any 10 Days of NASCAR Thunder event, call the speedway ticket office at 1-800-455-FANS (3267) or shop online at www.charlottemotorspeedway.com.