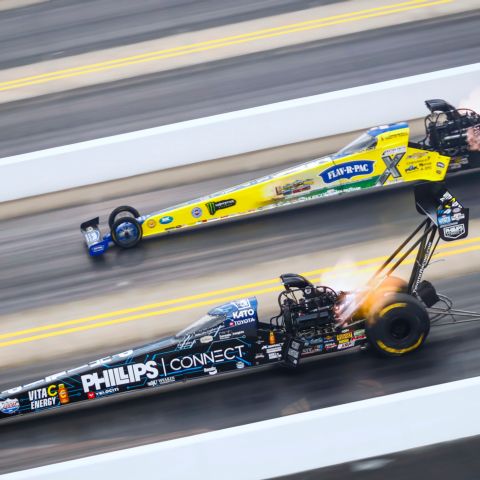 Ashley scored his second No. 1 qualifier honor of the season and of his career – both at zMAX Dragway.

“Every day is a dogfight, whether it’s a race or a qualifying session,” Ashley said. “I think we’ve made a statement that we’re here to play. We’re just out here having fun and trying to build something special. To see how far our program has come in three years’ time (since debuting in Top Fuel) is a testament to the partners we have and the team we have.”

“We’ll see what happens Sunday and I know the cards are leaning my way, but I know the competition we have to face,” said Force, who earned his 165th career No. 1 qualifier.

“It feels good to qualify No. 1. I’m excited to have the low time and I love being in the game with these guys.”

Erica Enders maintained her spot as the No. 1 seed in Pro Stock time trials, besting her time and speed from Friday with a best-in-class 6.510-second, 212.46-mph pass in Round 2. Enders’ effort gives the four-time champion a shot at her fourth win from the No. 1 seed in as many tries this year.

“I think (the results) just speak to what we’re capable of,” Enders said. “To come in here and bank points, we’re just going to keep chipping away at it and trying to maintain our lead.

Fans attending Sunday’s eliminations will be welcomed with clear skies and comfortable temperatures, as the drama of the NHRA’s Countdown to the Championship heats up at the Bellagio of drag strips.