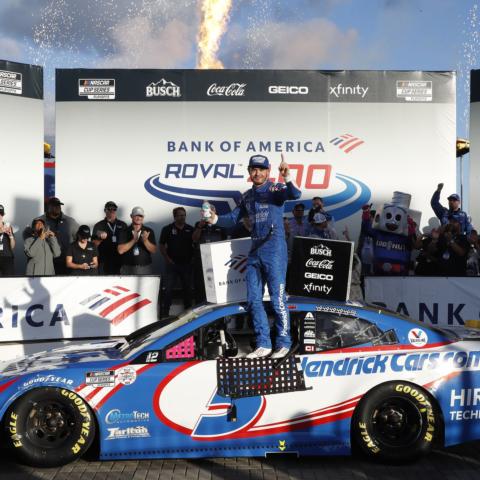 Kyle Larson spent much of Sunday’s Bank of America ROVAL™ 400 simply hoping to finish. When the checkered flag waved, however, Larson found himself in the same place as the last time he raced at Charlotte Motor Speedway – in the winner’s circle.

Larson overcame electrical issues which robbed power from his car’s battery in Stage 2 and knocked the alternator belt out of Larson’s No. 5 car. Larson and his Hendrick Motorsports crew remained patient, fixing the car’s technical and handling issues throughout the afternoon. The defending Coca-Cola 600 winner took the lead from Denny Hamlin with eight laps to go and sped to his seventh victory of the year and his first on the ROVAL™. In doing so, Larson became the first driver to win both of Charlotte’s NASCAR Cup Series races in the same year since Kasey Kahne in 2006.

Tyler Reddick and Chris Buescher didn’t qualify for the NASCAR Cup Series Playoffs, but despite Sunday’s race being a Round of 12 cutoff race, the duo finished second and third. Playoff drivers Kyle Busch and Hamlin completed the top five.

Chase Elliott, one of Larson’s Hendrick teammates and the two-time defending ROVAL™ winner, finished 12th and advanced to the Round of 8 along with Larson, Busch, Hamlin, Ryan Blaney, Martin Truex Jr., Brad Keselowski and Joey Logano.

Elliott won Stage 1 and appeared to be on his way to an unprecedented third consecutive win in Charlotte’s fall Cup Series race, but contact with Kevin Harvick on Lap 56 severely damaged Elliott’s No. 9 car and put his hopes of a repeat championship in jeopardy. Instead, Elliott’s team utilized a swath of cautions – nine for 18 of the races 109 laps – to repair the car and give Elliott the chance to advance.

Busch won Stage 2 and recorded his first finish of better than 30th in four tries on the ROVAL™.

It appeared for a long time that a different Kyle – Larson – wasn’t going to finish inside the top 30. Larson’s battery issues slowed his charge to the front after a subpar Stage 1 that saw him finish 11th and gain no stage points. He fell to 34th after pitting for the battery issues. Cliff Daniels, Larson’s crew chief, oversaw the diagnosis and repair to Larson’s alternator and battery problems.

Late-race cautions and sound pit strategy guided Larson to second on a Lap 102 restart. From there, the series’ winningest driver this year took over. Larson passed Hamlin and beat Reddick to the line by .782 seconds for his seventh victory of the season, 13th of his career and second at Charlotte.

KYLE LARSON, No. 5 HendrickCars.com Chevrolet (Race Winner): “It’s so satisfying, because I really did not think that we’d have a shot to win. I had a lot of different emotions throughout the middle parts of the race, thinking, ‘It’s so depressing and sad, I’m gonna lose my shot at a championship due to an alternator needing to get fixed.’ Then, I was passing some cars, we had a good green-flag cycle and I saw Denny (Hamlin) in my mirror. I thought I must be at the front and thought, ‘Man, it’d be nice to get a caution now.’ It all worked out. Just a wild race, all kinds of emotions all race long. I knew that I had a car that was definitely capable of winning. I had fresher tires than Denny but I was patient to a point. I was too patient, but I was able to finally get him. From then on, I had to just manage the gap behind me and not make mistakes. My team did an amazing job today.”

CLIFF DANIELS, No. 5 HendrickCars.com Chevrolet (Winning Crew Chief): “Certainly, winning the race didn’t look great for a while. When we stayed out (on pit stops), our car didn’t race the way we needed. I can’t remember the point we first had the voltage issue, but our guys did a great job being fast on their feet and making the changes. We just had to hang tough. Larson drove a great, great race. I’m very thankful for the way it worked out. It’s really cool to sweep Charlotte, whether it’s on the oval or the ROVAL™.”

RICK HENDRICK, No. 5 HendrickCars.com Chevrolet (Winning Team Owner): “It was the most nerve-wracking race, I think, that I can ever remember being a part of or watching. Just because of the ROVAL™ and the pit strategies and where people were on tires, it was a hard race to keep up with, but the crew chiefs did a nice job. Today, it all worked out for us. Kyle, this year, has tremendous confidence in the team and they have tremendous confidence in him. He told me all week, ‘I can’t wait for the ROVAL™. I’m gonna win the ROVAL™.’”

TYLER REDDICK, No. 8 Lenovo Chevrolet (Runner-Up): “It’s nice, but one spot different would be a totally different story. I’ve been saying all year that if we can put together a good race without any mistakes or incidents, that I think we can win. Today’s another notch in that belt, even after making some pretty good contact on the backstretch with Matt DiBenedetto.”

CHRIS BUESCHER, No. 17 Fastenal Ford (Third-Place Finisher): “We had a solid run today. We ran really solid at Talladega, too – probably the best superspeedway car that I can remember, as well. That’s two back-to-back (good runs). We needed a little more to grapple for the win, but I’m looking forward to heading home now (to Texas) and we’ll see if we can make that one our first win of the season.”