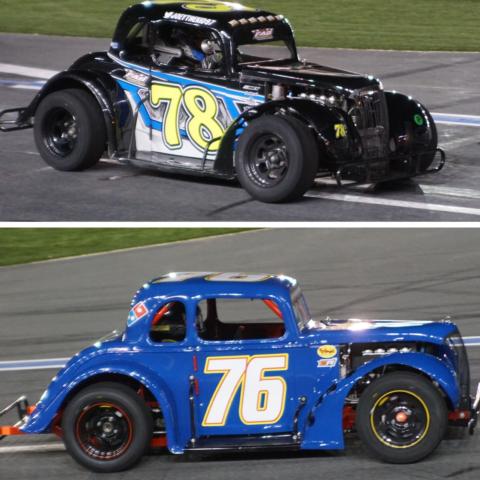 NASCAR star Bubba Wallace made his first Bojangles' Summer Shootout start since 2012 in the Pro feature, a spectacular race that saw Joey Padgett and Carson Ferguson engage in a nose-to-tail battle on multiple occasions with Wallace on the move from the middle of the pack.

Wallace - a second-year Monster Energy NASCAR Cup Series driver who has 12 Shootout wins to his credit - posted the fastest lap in qualifying. Following a re-draw, Wallace started sixth in the Pro feature and, with close friend and fellow NASCAR standout Ryan Blaney looking on, made his way to third at the finish. No one, however, had anything for Padgett when all was said and done.

"We had a great car," said Padgett, who led Ferguson and Wallace to the line by 0.612 seconds. "That thing was hooked up. Carson (Ferguson) just about wore me out, but I held him off. Man, that was fun. I saw him close in a little bit and I was thinking, 'Man, there has to be something else left in the tank,' and we had just enough."

Evoking memories of Darrell Waltrip's 1985 NASCAR All-Star Race win at Charlotte, Charlie Copeland - the assistant principal at Governor's Village STEM Academy - saw his bus come to a stop less than a lap after winning the principal school bus race. Copeland's second school bus race victory in three years came after passing Harris Road Middle principal Steven Bookhart for the lead with four laps left. Bookhart's bus billowed smoke before giving out - only for Copeland's bus to break a water pump with two laps to go. He slid through a quartet of slick turns to take the checkered flag as the school bus slobberknocker concluded in front of an enthralled crowd.

"Thank you, GVSA, students, all the staff. My bus died," Copeland said in Victory Lane. "I won this race two years ago and I wasn't going to be here tonight, but my teachers and students wanted me to be here. I'm glad we made it."

Todd Midas survived a late-race charge from Mark Green, Monday's Twenty-Six Acres Brewing Company Masters winner, to collect a well-earned Masters victory. Midas' final laps were spent watching Green in his mirror as much as the empty track ahead of him.

"It's pretty tough," Midas said of the dual focus he had to employ as the race wound to a close. "(Getting bumped out of the way) is always in the back of your mind. I stopped focusing on it toward the end. What it'll be is what it was, so it feels pretty good to win. We were skeptical about our motors, but they've prevailed two nights in a row."

Tommy Good triumphed in a caution-filled PMG Young Lions feature that was shortened to 19 laps. Good's No. 48 Ladyga Motorsports entry had the measure of his opponents, pulling away after the final restart to record the victory by 0.869 seconds.

"It's so awesome," Good said. "I can't thank everyone at Ladyga and everyone who tunes our engines. My spotters were helping me figure out where I could go and to make sure I held the lead."

Tuesday's VP Racing Fuels Semi-Pro division feature was a family affair, with the Robusto twins - William and Isabella - battling it out for the victory in the final laps. Isabella Robusto closed to her brother's rear bumper on the final lap of the 25-lap feature, but couldn't get close enough to pass him for the lead.

William Robusto's win marked his first of his Semi-Pro career.

"It was so hard, I just had to stay to the bottom and try to defend," Robusto said. "I'd just like to thank my mom and dad and my grandpa and everyone who's helped me."

Josh Horniman, Monday's Bandolero Beginner Bandit winner, won his heat on Tuesday and was poised to go 2-for-2 this season before a wheel-to-wheel battle for the lead sent Horniman spinning and out of contention. Payton Johnson inherited the lead, held on in a one-lap dash to the finish and claimed his first win of the young season.

"My dad told me to be smart, so when the restart came, I nailed it," Johnson said.

Lucas Vera continued his torrid start to the K1 RaceGear Bandolero Bandits season with an impressive triumph in Tuesday's feature. Vera expertly maneuvered lapped traffic to keep Luke Morey at bay by 0.319 seconds at the finish.

"It was really hard to pass the lapped cars but we were able to pass them," Vera said. "I was able to move to the top or the bottom of the track and stay ahead."

Saving his best lap for three-quarters into the race, Mash credited his crew chief for helping him survive the numerous restarts. The win came down to racing cautiously around traffic.

"I had to rely on cautions coming out for me to get caught back up," Mash said of his drive to the front in the second feature. "Once I did, I knew we had a decent chance to win this."

Next Tuesday, Ladies' Night comes to the Bojangles' Summer Shootout. Gates open at 5 p.m. with a full evening's worth of fun for females and families on tap.