The NASCAR All-Star Race has been rescheduled for July 15. As part of a triple header with the All-Star Open and the ARCA General Tire 150. Ticketholders for any originally scheduled May NASCAR event should visit Ticket Exchange Information Page for details on event credits/refunds. Our walk-in ticket office remains closed, but customer service agents are available by phone Mon.-Fri. 9a-5p at 1-800-455-FANS or by e-mail tickets@charlottemotorspeedway.com 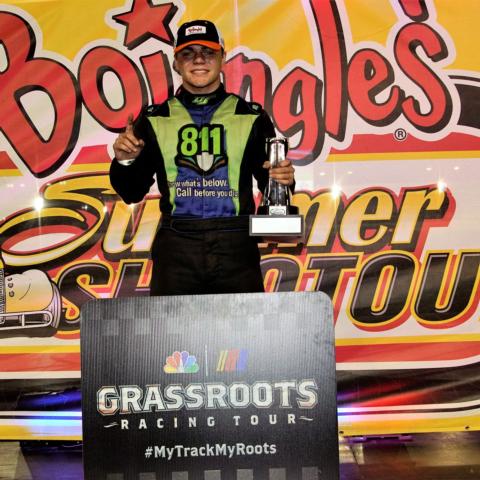 Ferguson had to keep Bubba Wallace at bay over the final laps - no easy task, given Wallace's speed and the NASCAR star's record on Charlotte's frontstretch quarter-mile. Wallace moved from ninth on the grid to the top three within 12 laps and had his sights set on Ferguson and Daniel Silvestri, who dominated the early stages of the race.

Once Ferguson and Wallace dispatched Silvestri from the lead, the front-running pair sped away with Ferguson prevailing by 0.765 seconds with Garrett Manes ending up third.

"You know the car's good when you can turn it through the center of turns 3 and 4 and rocket off the corner," said Ferguson, who enters Tuesday's races poised to celebrate the Pro title.

Thirty-two cars attempted to qualify for the VP Racing Fuels Semi-Pro feature - a season-best - with only 28 advancing to the A-Main. Hunter Wright not only advanced to the feature, the Tennessee driver passed title contenders Jason Alder and Isabella Robusto before the caution-filled race was concluded after 15 laps with Wright's No. 29w in front of Robusto, D.J. Canipe and Alder.

Mark Green increased his chances of bringing home the crown in the Twenty-Six Acres Brewing Company Masters championship race after a convincing win on Monday night. Green led Todd Midas across the line, with Jon Craig, points leader Robby Faggart and Carl Cormier across the line.

"I got lucky on the draw," Green said. "It's a big gain for me to start on the pole. As long as we don't make mistakes, we're good."

Janson Marchbanks and Ethan Norfleet engaged in a nose-to-tail duel for the final 15 laps of the PMG Young Lions feature. A restart with three laps to go saw Marchbanks give up the lead to Norfleet - who took a shot from Marchbanks entering Turn 4 on the final lap and spun out. Marchbanks crossed the finish line first but was moved to the tail of the field for the incident - promoting Jaiden Reyna to the No. 1 spot for the first win of his Young Lions career.

"My spotter told me to get under Tommy (Good) and hopefully the leaders would wreck each other," Reyna said. "That's exactly what happened."

Jadyn Daniels surged to a dominant second win of the season in the Farm Bureau Bandolero Outlaws feature. With points leader Garin Mash having to fight from 16th on the grid to finish fifth, Daniels' only challenges were to clear lapped traffic and keep Cameron Murray at bay over the closing laps. Daniels managed both with ease.

"It's more relaxing when you've won because you've gotten the first one out of the way," Daniels said. "At the beginning of the Shootout we had some bad luck, so to start getting some wins is pretty awesome."

Luke Morey and Lucas Vera locked horns in the final 10 laps of Monday night's K1 RaceGear Bandolero Bandits feature. Morey hounded Vera in the closing circuits, giving a spirited chase behind Vera's car before Vera built up just enough of an advantage to solidify his championship hopes and claim the win by 0.293 seconds.

"I just had to hit my marks, keep my head straight and listen to my spotter," Vera said.