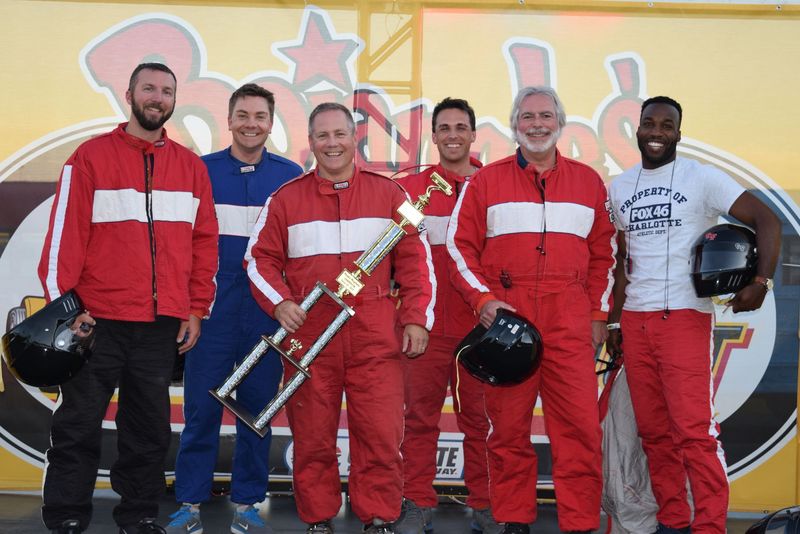 In the much-anticipated Media Mayhem school bus slobberknocker, WBTV meteorologist Al Conklin reigned over his opponents in a 10-ton tussle among television titans. After starting on the front row alongside fellow bus racing veteran Matthew East from Spectrum News, Conklin put his yellow #OnYourSide bus behind East in an early battle for the lead.

As the green flag dropped for a green-white-checkered restart, East challenged "Hurricane Al" into Turn 1 and was immediately pushed off the course into the grass. East recovered as his adversaries traded paint behind him but as they came to the checkered flag, East made one last desperation move. He rammed Conklin's bumper and sent him sliding up the track, but Conklin held on by a bus length for his third win. East was second with Cabarrus County Channel 22's David Baxter third. WCNC's Nick Carboni was fourth followed by WCCB's Derek James and FOX 46's Josh Sims.

"I work for (Channel) 3, it's great to have three (titles) and I'm ready to come back for more," Conklin said. "I liked 'The Pass in the Grass' myself. The losers probably didn't, but the fans did. If you're not first, you're last."

East was left to rue his missed opportunity after the heated, last-lap collision.

"I didn't need a debris caution to bunch the field back up," East said. "That was maybe the dirtiest restart I've ever seen - literally - when I got thrown in the grass, but Al said he did what he had to do to win. It was a great time, but when I come back next year, he's gonna go in the wall."

"I had a great time," third-place finisher David Baxter said. "You just get into the groove but the race ended too soon for me to make my move. I just ran out of time."

After three cases of the win slipping through his fingers, John Sossoman finally captured the checkered flag in the Cabarrus Brewing Company Masters division. Sossoman jumped out to a strong start as the green flag waved after he started in the third row. A battle for the lead quickly ensued between Sossoman and Mark Green. There was never more than a car length between the two veterans, and they continued to battle until a late-race wreck brought out the caution. On the restart, Sossoman was able to shoot to the front and create a gap between himself and Green that was enough to win.

Two-time and defending Lead 2 Pro Real Estate Pro division champion Jordan Black notched his first win of the season in a dominant performance that kick-started the 19-year-old's bid for an unprecedented third straight crown. Black cleared Dillon Faggart halfway through the 25-lap feature and held off points leader Austin Green for Win No. 1 of 2017. Faggart made a run at Black and Green on a late-race restart, but Faggart's hopes of victory evaporated when his No. 12 car drifted high in Turn 4.

"Dillon got a really good jump that last restart and almost cleared me but I drove it in there deep and got a run off Turn 2," Black said. "Those late cautions were stressful. … We had a great car all night so we'll come back next week and hopefully have the same level of speed."

Josh Kossek rocketed to the win in K1 Speed Young Lions competition after a caution-filled feature limited the race to 16 laps.

"I just hit my marks and tried to get better throughout the race," Kossek said. "I was hoping for that caution to come out so I knew I'd get the checkered flag."

For the second time this season, Zack Miller captured the victory in the VP Racing Fuel Semi-Pro division. Although Miller was the fastest car on the track, Garrett Manes dominated the field in the opening laps. A late-race wreck closed the field back up and gave Miller a second chance to put his No. 87 Legend Car in the lead. Miller immediately jumped to the front on the restart and tried to pull away from Manes. In the closing laps, Manes and Miller battled for first place and pulled away from the field. Miller held off Manes as they crossed the start-finish line for the win.

Emily Hedstrom claimed her second victory of the season in the Beginner Bandit division after passing Adam Eades with only three laps to go. Eades dominated the race, but a late-race slip moved him up the track and allowed Hedstrom to steal the lead. Leland Honeyman claimed a win in Beginner Bandits as well.

Cameron Bolin and Tommy Good hung on for wins in Outlaws competition. Zack Miracle's victory in the Bandits division was a miracle in itself as he managed to hold off hard-charging point leader Honeyman in the closing laps.