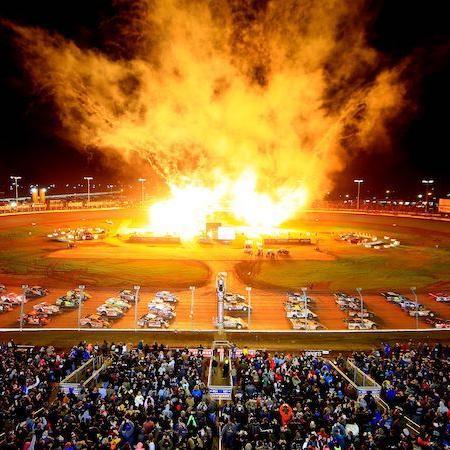 The Dirt Track at Charlotte will play host to the NGK NTK World of Outlaws World Finals, beginning with Thursday's qualifying sessions and going into Friday's and Saturday's races. CMS/HHP

The roar is back at The Dirt Track. As the world’s greatest sprint car, dirt late model and big-block modified drivers descend on The Dirt Track at Charlotte for this weekend’s NGK NTK World of Outlaws World Finals, excitement is building for three days of no-holds-barred, dirt-flying action in front of a packed house from Thursday to Saturday.

Here are four major storylines to watch once the dirt flies on Thursday night:

IS NO. 14 IN THE CARDS?: Donny Schatz is a ten-time World of Outlaws NOS Energy Drink Sprint Cars champion and a 13-time race winner at The Dirt Track. While Schatz won’t capture his 11th title this season, he’s the most accomplished sprint car racer in the field and he enters the weekend with an opportunity to finish third or better in points for the 16th year in a row. Schatz hasn’t lost a step – he’s won three races this year and has 60 top-10s in 75 starts – but a 14th Charlotte win could jump-start Schatz’s drive for another championship in 2022.

Longtime NASCAR driver-turned NASCAR on FOX broadcaster Clint Bowyer owns a two-car World of Outlaws Morton Buildings Late Models team, with drivers Josh Richards and Don O’Neal each in the hunt for Charlotte success on any given night.

SHEPPARDS LEAD THE WAY: When the final checkered flag flies on the Outlaw Late Model season Saturday night, Brandon Sheppard’s year-long goal will be complete. Thanks in part to eight wins, Sheppard has accumulated enough points to clinch his fourth Outlaw Late Model crown – tying Josh Richards for most in series history. Sheppard also has a chance to pass Richards for the most wins in Outlaw Late Model history, if he can sweep the weekend on Friday and Saturday. He’ll enter the week with 77 victories, one behind Richards’ all-time record.

Another Sheppard will top the standings in Super DIRTcar Big-Block Modified competition. Matt Sheppard clinched his eighth championship in October, surpassing the great Brett Hearn for most in series history. Four wins and 15 top-10s in 17 starts leave the Modified-racing Sheppard poised for a big celebration on Saturday – even bigger if he ends the year in the winner’s circle.

T-MAC DOES THE DOUBLE: Calling Tim McCreadie “versatile” is an understatement. The 47-year-old New Yorker has earned Super DIRTcar Rookie of the Year honors; won the Chili Bowl and the Outlaw Late Model title in the same season; competed in NASCAR for Richard Childress Racing and claimed victory in the Knoxville Late Model Nationals. He returns to The Dirt Track as its most recent Outlaw Late Model winner, but McCreadie will go for four checkered flags this weekend. He’s entered in the Big-Block Modified races as well as the Outlaw Late Model tilts.