The NASCAR All-Star Race has been rescheduled for July 15 as part of a triple header with the All-Star Open and the ARCA General Tire 150. Ticketholders for any originally scheduled May NASCAR event should visit Ticket Exchange Information Page for details on event credits/refunds. Our walk-in ticket office remains closed, but customer service agents are available by phone Mon.-Fri. 9a-5p at 1-800-455-FANS or by e-mail tickets@charlottemotorspeedway.com 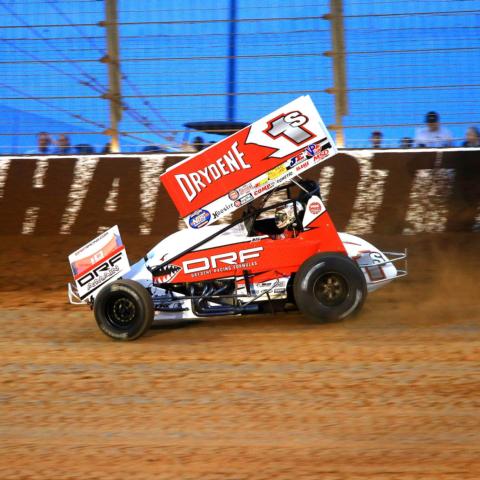 Logan Schuchart, who won the Patriot Nationals in May at The Dirt Track at Charlotte, posted the quickest time on Thursday for Friday's World of Outlaws NOS Energy Sprint Cars portion of Can-Am World Finals action. HHP/Jim Fluharty photo

The championship battles for the Can-Am World Finals kicked off on Thursday at The Dirt Track at Charlotte with a thrilling evening of qualifying on Charlotte's illustrious four-tenths-mile clay oval.

Race fans visiting The Dirt Track can expect more side-by-side battles on Friday and Saturday, as the stars of the World of Outlaws NOS Energy Drink Sprint Cars, the World of Outlaws Morton Buildings Late Models and the Super DIRTcar Series big-block modifieds duel for victories and championships at dirt racing's ultimate showcase of high-octane excitement.

Brad Sweet and Donny Schatz, separated by eight points, will take their fight for sprint car supremacy into the weekend. Schatz edged Sweet in qualifying for Friday's heats, though Sweet was quicker for Saturday's races.

Logan Schuchart - who won the Patriot Nationals in May at The Dirt Track - opened up his bid for World Finals glory in successful fashion. Schuchart posted the quickest time for Friday's sprint car events at 12.774 seconds, while Aaron Reutzel (12.737 seconds) was best for Saturday.

In a scintillating display of speed, Josh Richards led the way in qualifying for both Friday (14.750 seconds) and Saturday (14.805) in Morton Buildings Late Models competition.

With clear skies in the forecast, gates open at 3 p.m. on Friday with opening ceremonies at 3:45 p.m. before a full slate of races start at 4 p.m. Feature races in the big-block modifieds (40 laps), late models (50 laps) and sprint cars (30 laps) will cap the day's festivities.

Race fans from all 50 states and nine countries - as far away as Tanzania and the Netherlands - will descend on America's Home for Racing for this weekend's unforgettable spectacle of dirt-racing prowess.