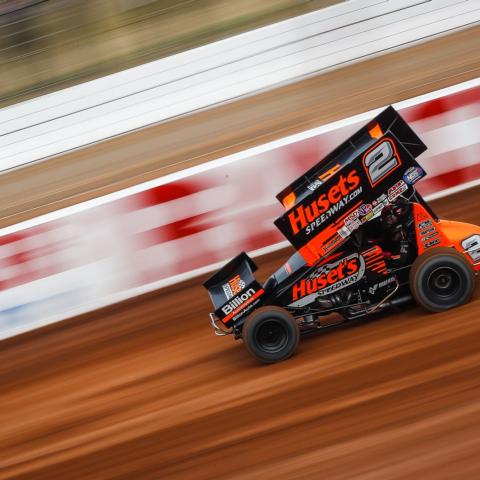 While David Gravel didn't win the war this season, he claimed another important battle on Friday night. Out of championship contention, Gravel nonetheless continued his dominance at The Dirt Track at Charlotte by winning the 30-lap feature for the World of Outlaws NOS Energy Drink Sprint Cars on the penultimate night of the NGK NTK World of Outlaws World Finals.

Gravel has won four of the last five feature races at The Dirt Track and will go for the weekend sweep on Saturday. Gates open at 12 p.m. ET, with Opening Ceremonies at 1 p.m.

Gravel, who led every lap and won the DIRTVision Fast Pass Dash to earn the pole for the 30-lap sprint car feature, took the lead for good after dueling slide jobs with Brian Brown with 12 laps to go.

"Feels really good to get a win," Gravel said. "I didn't seal up second place in points and wanted to do good tonight and seal it up. I think we did that tonight. So, we go into tomorrow to just have some fun and try and get another one."

Gravel and the rest of the Outlaw sprint car field chased Logan Schuchart for the first half of the race, but Schuchart had a flat left-rear tire after a restart and lost the lead.

"It was just all track positioning," Gravel said. "I think if I got the lead on Logan, I don't think he would've passed me. It was just all about where you were at and being in the right place at the right time. Luckily, we were there.

"Brownie kept throwing sliders on me. I was running as hard as I could trying to clear him, and finally I was able to clear him. I had to run a torrid pace for those last 12 laps, and it took a damn long time. I got up to lapped traffic sooner than I wanted to. I saw there were seven to go. And I'm like, 'Man, I have to try something here.' It started cleaning up off the cushion, almost like it was taking rubber a little bit, so I moved down, and it worked out."

Brown ended up losing second to Kerry Madsen off Turn 4 on the final lap. Madsen recovered from an incident on the second lap to rally through the field.

"Can't complain," Madsen said. "I messed up pretty bad on the second lap. We were back at 10th at one stage, and fortunately those last couple double-file restarts helped me out. I needed really clean air to keep my car locked down. The last five laps, I started pushing really hard, and it came to me. That's racing, and I'm pretty happy with P2."

"Maybe I conceded second to Kerry, maybe chasing a little bit of rubber a lane off the top and thinking I might have something for David," Brown said. "He got a little balled up off (Turn) 4 one time and let me get a little bit of a run. I was almost laying to try and snooker him and probably should have ran a little bit harder and see what I could do."

"(The car) was really good," Davenport said. "I thought I was a little bit better than Brandon when he was behind the 7 car (of Ricky Weiss), but I knew he had a little bit of dirty air and I could run a lane lower than he could. Once (Brown) he got into the lead, I thought, 'Oh, crap, he's going to be in clean air.' But we got to lapped cars and it slowed him up a little bit. It gave me just enough where I could get a run on him."

Yankowski was the fastest qualifier and won one of the four heat races.

"It was just one of those days, it just seemed like everything went our way," Yankowski said. "I don't know if I could ever have a day like that again. We've got a great group of guys. This was awesome."

The other heat-race winners were Brett Hearn, Mike Trautschold and Peter Britten.

Brown, Madsen, Spencer Bayston and Kasey Kahne were the heat-race winners in sprint cars. Gravel earned his series-leading 19th quick time of the season with a lap of 12.579 seconds.