A.J. Allmendinger Makes It Four In A ROVAL™ 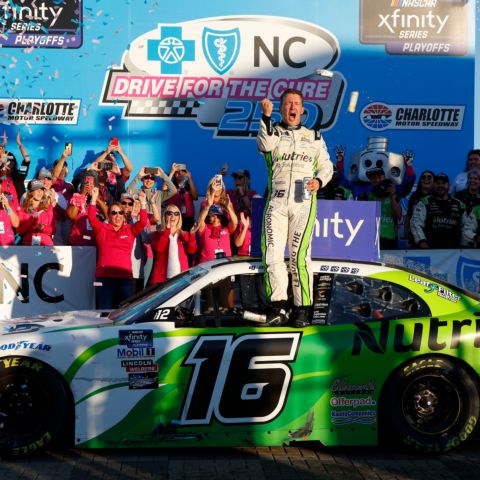 A series of late-race accidents led to cautions that bunched up the field, and afforded Allmendinger a golden opportunity to nudge his way past Ty Gibbs, hold him off for a final run to the finish and win the Drive for the Cure 250 presented by Blue Cross Blue Shield of North Carolina for the fourth year in a row.

Allmendinger won the pole, led a race-high 25 laps and was at his best when it was needed most.

Gibbs paced the field for much of Stage 3, but Allmendinger saw his chance on the penultimate restart, pounced and never flinched on his way to a comfortable victory, his second consecutive NASCAR Xfinity Series triumph.

The race marked the cut-off of the Xfinity Series Playoffs' Round of 12, which saw defending series champion Daniel Hemric eliminated along with Ryan Sieg, Riley Herbst and Jeremy Clements.

Long-time Formula One competitor Daniil Kvyat finished 15th in his series debut with Sam Hunt Racing, while IndyCar star Marco Andretti ended up 36th in his first NASCAR start. Andretti was involved in a crash with Jeb Burton on Lap 46 that ended his day early.

Allmendinger joins Gragson, Gibbs, Allgaier, Berry, Jones, Sam Mayer and Austin Hill in the Round of 8. Allmendinger starts seventh in Sunday's Bank of America ROVAL™ 400 as he seeks to become the first driver to complete a ROVAL™ weekend sweep.

A.J. ALLMENDINGER, NO. 16 KAULIG RACING CHEVROLET (Race Winner): "I knew if I could hang on (Gibbs') outside in Turn 1, I'd at least have a shot. I knew it was going to be a battle when that last caution came out. I spun the tires, and (Gragson) gave me a good shove. I tried to not put it in the fence and just put in two solid laps. This was a race that at times, even with 10 to go, five to go, that I felt like I wasn't going to get it done. I knew that if we had enough restarts, I could just time it right and get by (Gibbs). I feel like we stole it, but I'm not going to give it back."

TY GIBBS, NO. 54 JOE GIBBS RACING TOYOTA (Runner-Up): I feel like we had a really fast Monster Energy Toyota. I'm proud of the effort from the guys. It was a good points day, so the next goal is trying to get to Phoenix (for the Championship 4). I just didn't execute (on the final two restarts). There was about 80 of them, it felt like. I just spun (the tires), A.J. got a good restart. The last one, we just got ran wide, touched the fence and it just killed the momentum and I just couldn't get back to him. I felt like I got back to him a good bit there on the last lap and a half of the race, but we just didn't have enough time."

NOAH GRAGSON, NO. 9 JR MOTORSPORTS CHEVROLET (Third-Place Finisher): Congrats to A.J. I had a lot of fun out there. We've got some really good race tracks for us coming up: Vegas, Homestead, Martinsville, we're pretty good. I'm super excited to get there. I was joking with the guys this morning that I had a really good September (winning four races in a row), but a terrible October. We gave ourselves a shot at Talladega and we gave ourselves a shot today. To come home third is still a good day. We've just got to go win."