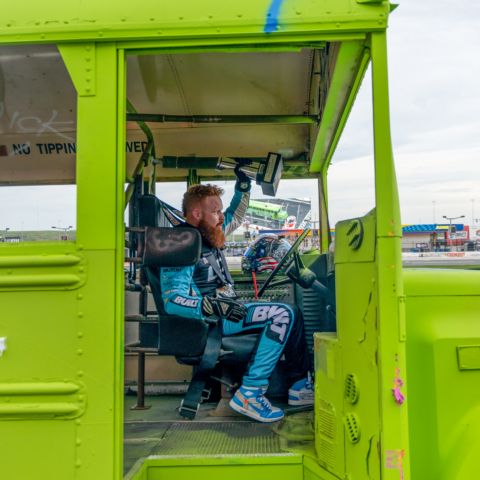 ‘Twas “Christmas in July” and all through the speedway, drivers were nestled snugly in Legend Cars and Bandoleros while visions of checkered flags danced in their helmets at the Cook Out Summer Shootout presented by the NASCAR Hall of Fame.

On a doubleheader night complete with Christmas music, decorations and games, the area’s fastest pastors rumbled around Charlotte Motor Speedway’s quarter-mile in search of a higher (horse)power. Five area clergymen put the pedal to the medal in the highly anticipated “Faster Pastor” school bus race. PBC Harrisburg pastor, Evan Smith, got off to a slow start and in the spirit of giving, Multiply Church pastor Zach Whitt gave Smith a much-needed boost with a bump from behind to get the race rolling. Pastor Tyler Kulp from Our Lady of the Assumption Catholic School took the lead on lap two and held it until Whitt took the inside corner of turn three on lap four. Whitt on to a heavenly victory in the battle of behemoth school buses.

“Thank you to our sponsors—the Father, the Son and the Holy Spirit,” Whitt said in victory lane.

Round 8 Bandolero Outlaw Driver Emma Britt Gets Her Christmas Wish

The Round 8 Bandolero Outlaw feature turned out to be ladies free-for-all. McDonough, Georgia resident Emma Britt, hit Charlotte Motor Speedway’s quarter-mile for the first time this summer and quickly set the pace after the green flag. Olivia Murray battled with Britt at the point, but Britt wouldn’t relent and took a two-car lead by lap four. Despite wrecks and yellow flags, Britt cruised to victory becoming the seventh different Outlaw winner in eight features this summer.

The Round 8 VP Racing Semi-Pro feature was filled with bumps, crashes and collisions as drivers fought to find a checkered flag in their stockings. Despite thirty drivers in the field, the true battle for 23 laps was between Donovan Strauss and Sean Abell. Then with two laps to go, Carson Brown executed a perfect bump-and-run with Strauss coming off turn one to take the lead while Abell fell behind. Brown captured the win with Byron Daley finishing second.

The Round 9 Bandolero Outlaw feature started with a crash-filled opening lap as Hunter Jordan and Olivia Murray collided on the front row, sending the field behind them spinning through water barrels and in some cases, straight to the garage. Murray escaped the mess with little to no damage and led the pack back to the restart. With each ensuing turn around the quarter-mile for the next 14 laps, Murray pulled away from her competition, building as much as a two-car length lead. On lap 15, Bobby Gossett closed the gap and took the high-side to pass Murray off of turn two. Murray would challenge but could never retake the point as Gossett found a second feature win of the season gift-wrapped under the tree.

Carson Brown was feeling the Christmas spirit as he started on the North Pole in Round 9 of the Cook Out Summer Shootout presented by NASCAR Hall of Fame. In a race filled with water barrels rolling and yellow flags flying, Brown fought off a fierce challenge from Canadian driver Danny Chisholm. Leading all but one circuit of a 13-lap feature called due to time constraints, Brown swept feature wins on “Christmas in July” night.

Cook Out Summer Shootout fun continues with a Round 10 grand finale on Tuesday, August 2. Champions Night at America’s Home for Racing will feature a school bus race with Kaulig Racing NASCAR drivers and executives behind the wheels. Justin Haley, Landon Cassill, Daniel Hemric, and team owner Chris Rice are expected to do battle. The final night of summer racing will also feature a full slate of Legend Car and Bandolero action to determine season champions, followed by fireworks and a driver autograph session.

Round 8 Top 10 in each division of Tuesday’s races (unofficial results):

Round 9 Top 10 in each division of Tuesday’s races (unofficial results):

Cook Out Summer Shootout entry is $10 for adults. July 5 ticket holders will receive $5 entry and as always kids 12 and under are FREE. Tickets can be purchased at the gate, by calling 800-455-FANS or online at www.charlottemotorspeedway.com/tickets.