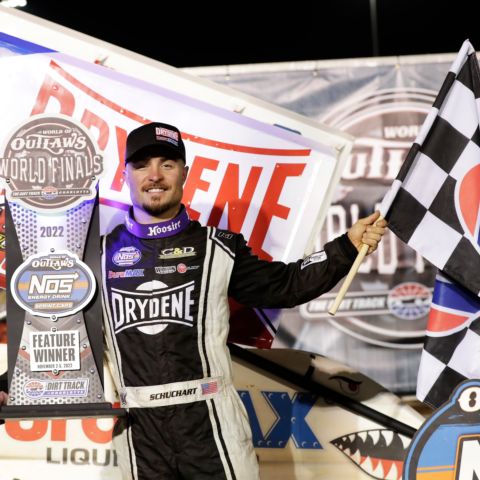 Logan Schuchart passed Carson Macedo on the penultimate lap of Wednesday's World of Outlaws NOS Energy Drink Sprint Cars portion of the World of Outlaws World Finals at The Dirt Track at Charlotte, and held on for his fourth win at the track. HHP/Garry Eller

Carson Macedo appeared poised to win Wednesday’s World of Outlaws NOS Energy Drink Sprint Cars feature in the opening night of the World of Outlaws World Finals at The Dirt Track at Charlotte.

e posted the quickest time in time trials, won the Dash and gapped his opposition at every turn.

A mechanical issue in the closing laps, however, gave Logan Schuchart the inside line to a thrilling – if unexpected – victory.

Schuchart passed him exiting Turn 2 and left Macedo scrambling to nurse his car to the finish, a goal he achieved en route to a runner-up finish ahead of Sweet, Rico Abreu and Giovanni Scelzi.

“After last year, this place owes us one. We fell out of the race while leading twice last year,” Schuchart said. “No matter what setup we throw at this track, our car seems to run well. We had a different setup and it was still fast. I felt like I was going to pass Carson before that last restart. We had a little bit of luck with him running out of fuel, but that’s part of the game. I’ve been in that situation before, so we’ll take them however we can get them.”

Macedo was gracious in defeat.

“The nozzle line broke off and the line was actually gone,” Macedo said. “I really think we would’ve won the feature if that didn’t happen. That’s the way it goes sometimes. Hats off to my team. They did an incredible job all night, they gave me an incredible car and it felt amazing all night. We’ve got a fast race car, and that’s what really matters. I’m excited for the rest of the weekend.”

Shane Clanton passed polesitter Brandon Overton on the first lap of Wednesday’s World of Outlaws CASE Construction Late Models feature and was in prime position to score the win after comfortably leading the race’s first 33 laps. A late caution, however, bunched up the field and afforded Mike Marlar with a golden opportunity to overtake Clanton.

Marlar worked the inside line to perfection after the restart and powered by Clanton on the race’s penultimate lap, speeding to a win that surprised Marlar as much as anyone.

“I raced Clanton really hard there at the end,” Marlar said. “I know you hate to see somebody lose them that way, but I did what I had to do to win. It’s awesome to get the weekend off to a good start. We’ve got to capitalize tomorrow and make all the right moves.”

Clanton held on for second ahead of Trent Ivey, Overton and Tim McCreadie.

“I knew when we had another caution I was going to be in trouble there,” Clanton said. “This is the best run I’ve ever had at Charlotte, so it still kind of feels like a win.”