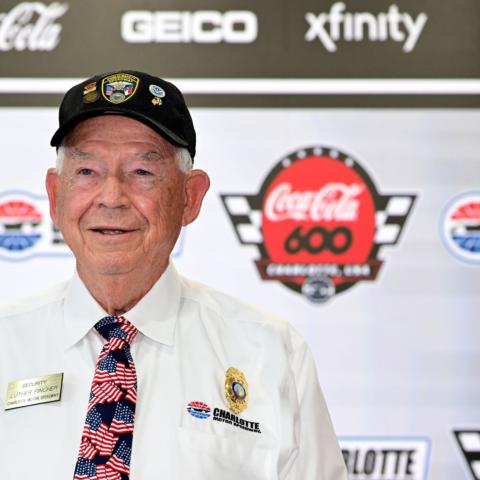 Luther Fincher has seen it all at Charlotte Motor Speedway.

From the speedway's inaugural Coca-Cola 600 on June 19, 1960, to the world-class spectacle that surrounds the 63rd running on Sunday, Fincher's tenure as a press box security guard at the speedway has spanned more than 60 years.

Speedway officials honored Fincher with a special presentation in the media center on Sunday, saluting Fincher's announcement that he will retire following Sunday's race.

Fincner's commitment to his fellow man also included service time with the U.S. Marine Corps, and 20 years as the Fire Chief for the Charlotte Fire Department. Spending race weekends at his home track, though, represent some of Fincher's most treasured memories.

"It’s purely been a pleasure and an honor to come and work here," Fincher said. "I knew so many of the people who were supposed to be in the press box, and those who weren’t supposed to be there, so that made it easy. It was an easy job to me. It seemed like I had what it took to do that job.

"It’s been a lot of fun. It started out as just concrete bleachers and now, it’s turned into a city. It’s a real city out here. There aren’t many cities in North Carolina that will be as large as the speedway when the race starts tonight."