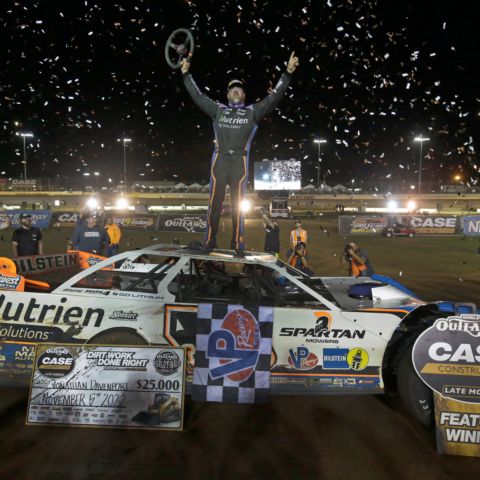 Jonathan Davenport didn’t wear a cape in Saturday’s World of Outlaws CASE Construction Equipment Late Models feature at The Dirt Track at Charlotte, but the driver known as “Superman” put on a performance befitting a superhero.

Davenport captured the World of Outlaws World Finals nightcap on Saturday, but he had to do it from the outside of the fourth row – and against some tough competition.

Hudson O’Neal moved past polesitter Shane Clanton early in the 50-lap feature and engaged in a spirited battle with Chris Madden, before a caution for Kyle Strickler’s stricken car on Lap 20 bunched up the field. Davenport had already moved up to fourth, and wasted little time in overtaking Dennis Erb Jr., the series champion, for third.

Davenport cleared Madden soon after and, after a crossover move in Turn 1 on O’Neal, took the lead and held it when the checkered flag flew. The win marked Davenport’s fifth in 11 Outlaw Late Model starts this season.

“We brought out the oldest car we’ve got,” Davenport said. “This thing’s been beat up and down all over the country, but whenever we break it out, time and time again, it performs. I’m a little out of breath. I haven’t raced the top (groove) for that long in a while.

“Thanks to all these great fans for coming out. I’m glad we could put on a hell of a show.”

Schatz scored his 14th victory at The Dirt Track, his 307th career win and his second triumph in as many nights, taking the lead away from Sweet on Lap 11 of the 30-lap feature and never looking back. Schatz entered Charlotte hoping to play spoiler as much as possible, and left with two trophies in three nights of racing.

The Tony Stewart Racing driver wasn’t challenged on a restart with one lap to go after Cale Thomas blew a right-rear tire, cruising to victory ahead of Giovanni Scelzi and Sheldon Haudenschild.

“It’s just incredible what these crew guys have done the last few weeks,” Schatz said. “The results hadn’t really shown it (until this weekend) but they’ve been digging. We’ve got a lot of our partners and sponsors here, so it’s good to see them and to see such a great crowd.

“We’ll do our best to see if we can’t continue this through the winter and start off next season able to race for a championship. Congrats to Brad and his team. I know what it’s like to be in his position coming right down to it and it’s a great feeling of satisfaction to win it. Congrats to those guys, but we’re gonna make it hard on them next year. At least we got rid of that No. 13 win pretty quickly. Now, we don’t have to worry about any superstitions.”

Pole winner Erick Rudolph paced the field for the first 15 laps of the 40-lap feature. Max McLaughlin slid by Rudolph and held the point for much of the race, but a spate of late cautions bunched up the field and presented Williamson with a clear pathway to victory.

Williamson, who won Thursday’s Big-Block Modified feature, cleared McLaughin for the lead in Turn 4 after a restart – but a caution before the field crossed the line put McLaughlin back in front.

His advantage was short-lived, however, as Williamson passed McLaughlin and sped to victory, with McLaughlin second and Demetrios Drellos third.

“I’ve got to thank Demetrios for that one,” Wiliamson said. “He showed me where to be there, and then the caution came out, thank God. I didn’t think I was going to get Max. He slid up on me a little and I had to check up and I was thinking I could throw a slider in Turns 3 and 4.

“Those cautions probably cost him the race, so I can’t really complain about them. He had a good car and I don’t think I was going to get him without those. Luckily, I threw a hail mary there and was able to get by him.”