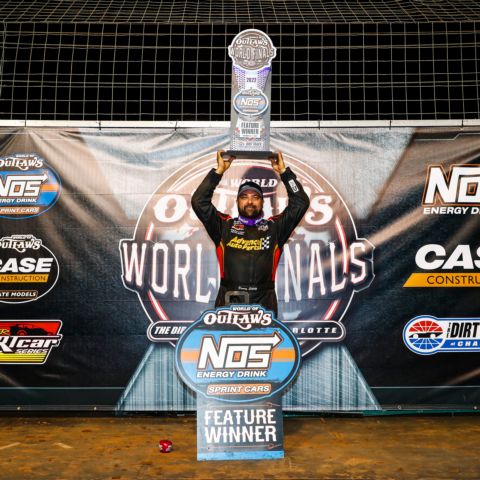 Two days before the rest of America turns back the clock, Donny Schatz did so on Friday night at The Dirt Track at Charlotte.

The 10-time World of Outlaws NOS Energy Drink Sprint Cars champion pulled off a throwback performance at one of his best tracks on the Outlaw circuit. Schatz won his heat race, won the Dash and led every lap of the feature en route to a convincing triumph at the World of Outlaws World Finals.

The Tony Stewart Racing driver expertly navigated traffic and held series points leader and defending champion Brad Sweet at bay in the early going, then sped away from Sweet and Cory Eliason after a caution and restart with two laps to go.

The win marked Schatz’s 13th at The Dirt Track, continuing a legacy of success the veteran driver developed over years of driving at a level few of his peers could aspire to match.

While Sweet and fellow title contender David Gravel have taken more than the lion’s share of wins this year – 12 victories between them – Schatz wasn’t challenged on his way to Victory No. 4 on the season and No. 306 in his illustrious career.

“We had a great car all night,” Schatz said. “It didn’t hurt drawing that No. 1 (position for the Dash). We wanted to salvage a decent points night. We’re not in the points championship, but Brad and David are fighting for it and we didn’t want to get in their way.

“What a night. I just can’t thank my team enough. … We’ve been pretty blessed here with the races we’ve won. I’m not too superstitious, so I’m happy with a Lucky No. 13 win.”

Eliason moved by Sweet on the penultimate lap for second, while Sweet held on for third ahead of Cole Macedo and Tyler Courtney. Gravel finished 10th. Logan Schuchart, Wednesday’s feature winner, finished 27th after suffering a mechanical failure early in Friday’s race.

Sheppard pulled off the track – from the lead – during a caution period on Lap 19 of the 30-lap feature.

Mathieu Desjardins benefited most from Sheppard’s misfortune, as the pole-winning Canadian inherited the lead again with 11 laps to go. Desjardins had his hands full with a hard-charging Tim Fuller over the final laps, but two slide-job attempts at stealing the lead from Desjardins were unsuccessful.

Desjardins’ win was the first of his Super DIRTcar Big-Block Modified career, in only his second series start on American soil.

“It’s incredible. I was a kid, and my dream was to drive a race car,” Desjardins said. “Today, I win the World Finals at Charlotte. I just don’t understand it, it’s crazy. I didn’t know (Sheppard’s) car was broken. When I took over first, I knew I had a good car. I just had to keep it flat-footed all the way.

“I could see Tim Fuller behind me, but I stayed focused. The lapped cars helped me along the way.”

Fuller finished second – after starting the feature from the outside of Row 6. Demetrios Drellos was third, with Peter Britten fourth and Max McLaughlin fifth.