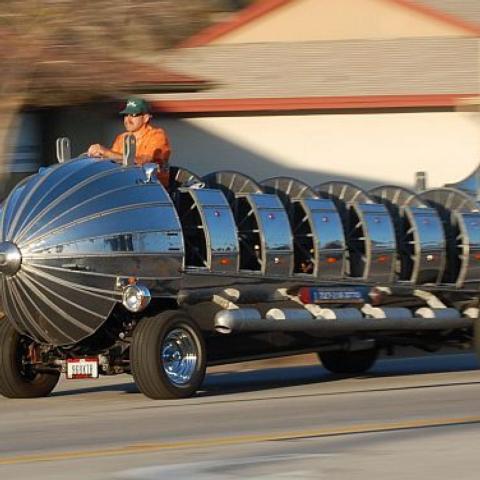 Looking exactly like something Buck Rogers and Flash Gordon would have flown into space back in the 1930s, the Euclid Beach Park Rocket Ship Car is blasting its way to Charlotte Motor Speedway for the April 4-7 Pennzoil AutoFair.

Most "circle swing" amusement park rides spend their lifetimes traveling a million miles in very tight circles. Such was the case with the three Rocket Ships that spun passengers silly at Cleveland, Ohio's Euclid Beach Park. Seating 10 to 15 excitement seekers at a time, the wood and stainless steel rockets were installed in 1935 during the height of America's Great Depression and were abandoned when the park closed in 1969.

In 2005, amusement park enthusiasts Joe Tomaro and John Frato purchased one of the 26-foot-long rockets from a warehouse and put it into their growing collection of Euclid Beach memorabilia. Because they had turned a retired Euclid "Thriller" roller coaster train into a street-legal ride four years earlier, the temptation to do the same with the rocket was strong. In 2006, the business partners mounted the rocket on a 1-ton Chevrolet truck chassis and installed a 502ci Chevy V-8 and automatic transmission. With 490 horsepower on tap and an air ride suspension, the Rocket Ship lives up to its name while delivering a respectable 13 to 15 miles per gallon on the highway. Adding to the space opera feel of this unique car is an array of 1,700 color-changing LED lights.

The Euclid Beach Boys, as Tomaro and Frato have become known, now offer ride and dine excursions around Cleveland (and, in winter months, Florida) in their Thriller and Rocket Ship cars. Tomaro reports that many of today's repeat customers enjoyed the rocket when it was traveling between planets at Euclid Beach.

"It's like our customers get to relive their childhoods again," he said. "It's a trip down Memory Lane for them."

During all four days of the April 4-7 Pennzoil AutoFair, the motorized Rocket Ship Car carnival ride will share space with a Ghostbusters tribute car, a 60th anniversary display of Chevrolet's El Caminos, an exhibit of Bonneville Salt Flats racers, and a handful of Ridler Award-winning custom machines.