The Stars Come Out For Coca-Cola 600 Festivities 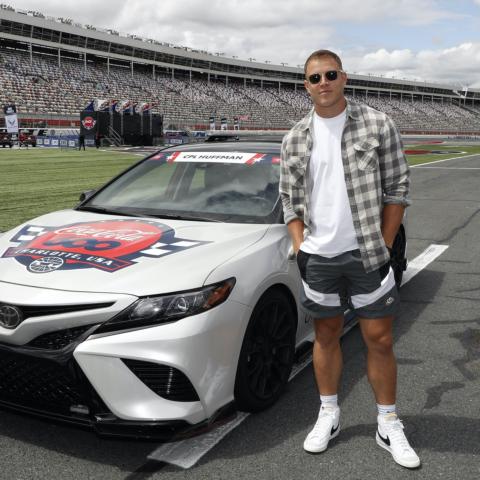 A who's-who of entertainment and sports icons visited Charlotte Motor Speedway on Sunday to experience the excitement of the Coca-Cola 600.

World-renowned talk show host Jay Leno and his longtime musical director, Kevin Eubanks, met with military veterans before taking over as co-Grand Marshals during the pre-race buildup to the green flag.

Carolina Panthers All-Pro running back Christian McCaffrey revved up his Sunday with a high-octane training session aboard a Toyota Camry TRD before assuming the title of Honorary Pace Car Driver.

Known for his unparalleled car collection and his passion for all things that go fast, Leno was in his element among the fan base at Charlotte.

"These kinds of fans are great," Leno said. "It's great fun here, because people come up and right away, they start talking about cars. That's why I'm glad I don't play a doctor on TV, because people would come up to me and say, 'Can you look at this thing?' Well, I'm not really a doctor.

Eubanks, who will serve as co-host for Leno's new FOX show "You Bet Your Life," was taken aback by the pageantry and patriotism surrounding NASCAR's toughest test of man and machine.

"Just coming to see all this is so cool," Eubanks said. "All the things around let you know it is Memorial Day Weekend. With everything else that's exciting, I can't wait to get the energy going but at the same time, it reminds you this is Memorial Day Weekend and we have so many great things to say about our military. All of that is encompassed in the whole thing, which I appreciate very much."

"This is a great day," McCaffrey said. "I know everyone in Charlotte is excited for it and there are so many good causes going on here today.

"I'm excited. I came in with super-high expectations about the speed, but they told me I'm 46 miles an hour on the cruise control. When I heard that, my nerves kind of calmed down a bit, but they also said the first two guys, the ones on the front row, might give me a love tap. We'll see. I'm looking forward to this."