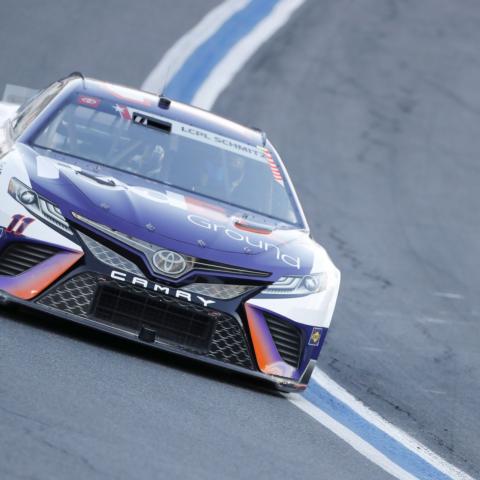 Denny Hamlin edged Kurt Busch to the pole for the Coca-Cola 600 by 0.003 seconds on Saturday at Charlotte Motor Speedway. HHP/Tim Parks

Nine years after his first Coca-Cola 600 pole, Denny Hamlin added a second to his resume by a slim margin on Saturday.

Hamlin bested Kurt Busch – who drives for Hamlin's 23XI Racing team – by a scant 0.003 seconds to score the 34th pole of his career. A 29.399-second, 183.68-mile-per-hour lap pushed Hamlin's Toyota above Busch's on a night where Toyota-powered cars reigned supreme.

William Byron's Chevrolet broke up the party with a fifth-place result, while Austin Cindric ended up sixth and Bubba Wallace seventh.

Larson's No. 5 Hendrick Motorsports Chevrolet was fastest in practice, but contact with the wall damaged Larson's car to the point that it couldn't be repaired in time to qualify. He'll start Sunday's 63rd running of the Coca-Cola 600 in 36th place.

DENNY HAMLIN, No. 11 Joe Gibbs Racing Toyota (Pole Winner): The end result is probably the perfect scenario for me. Our car's been good. It was good off the truck. We just continued to tune on it quite a bit and we thought once this thing got into the night, that you want to run the low line through (turns) 3 and 4 as much as you can. I got as many reps as I could doing that and it looked like it was the difference maker. Happy about that, would like to talk about the long relationship I've had with Coca-Cola, for 18 years. Being a part of the Coke family and not winning this race has certainly been very frustrating, and certainly it would help my resume. It's the top of my list by far, which shows how badly I want it.

Hopefully, the No. 1 pit stall will help us relax a bit. ... Any time you get compared to others, which you usually do, they talk about what you’ve won: Daytona 500s, Southern 500s, Coca-Cola 600s and Brickyard races. Those races definitely matter. The No. 1 thing for me is definitely winning the Coke 600, for my relationship with Coke but also because I’m trying to knock off all the crown jewels."