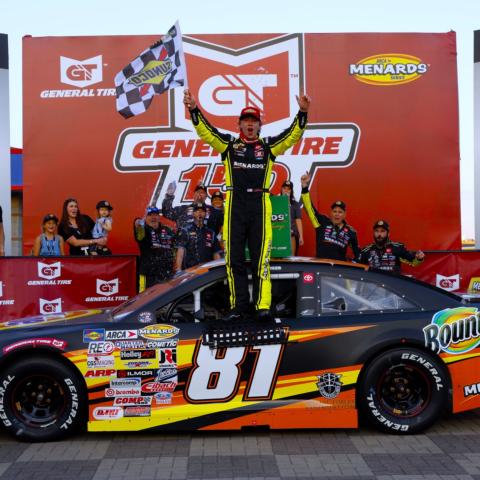 There was no stopping Brandon Jones on Friday night at Charlotte Motor Speedway.

The Joe Gibbs Racing driver turned his second ARCA Menards Series start at America's Home for Racing into his second win on the 1.5-mile superspeedway, dominating the second half of the General Tire 150 en route to a victory by an astounding 8.68 seconds over Corey Heim.

A championship contender in the NASCAR Xfinity Series, Jones' first foray into ARCA action this year saw the driver of the No. 81 Tide/Menards/Bounty Toyota lap all but the top five cars in the field over 100 laps.

BRANDON JONES, No. 81 Tide Toyota (Race Winner): “Tonight, I certainly learned everything I needed to learn going into (Saturday). That was our main focus. I wanted to get a really good read on the PJ1 they sprayed down.

"The crew did a phenomenal job of making adjustments. I also think the sun going down played into our favor. I think the track just gained a little more grip. It was really a successful day, thanks to Menards and Tide for letting me come down and play. We learned for tomorrow and that was main goal."