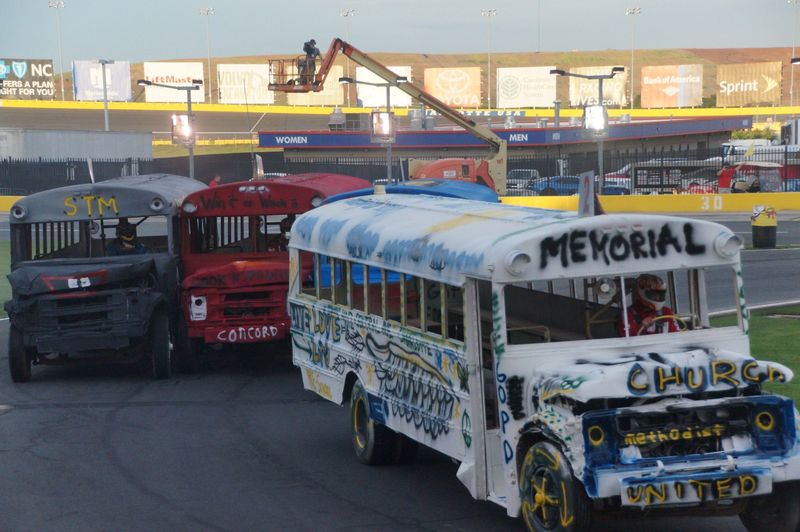 A high-speed congregation of clergy will converge on Charlotte Motor Speedway's frontstretch quarter-mile in Tuesday's Bojangles' Summer Shootout Round 7 presented by the North Carolina Virtual Academy with a fender-banging, Faster Pastor school bus slobberknocker among its family-friendly attractions.

While they're royalty to their churches, local pastors will compete in 10-ton school buses to determine the Prince (or Princess) of the Pavement Pulpit.

Defending Faster Pastor champion Samuel Donahue of Hope City Church in Harrisburg had the option of sending his own message to his competitors - but in a true preacher's fashion, he let the good book do the pre-race talking.

"I guess I would say, 'For the Lord your God is the one who goes with you to fight for you against your enemies to give you victory,'" Donahue said in quoting Deuteronomy 20:4.

Among the pastors slated to face off in the school bus showdown are:

Mares, a first-time contender for the championship belt and the wife of JR Motorsports mechanic Bill Mares, offered a different method of attack.

"As a pastor and 'NASCAR wife,' I'm excited to meld my two worlds into one night," Mares said. "The lucky No. 7 Mount Tabor bus is ready to put on a show."

The future stars of motorsports continue their rise up the racing ladder all summer, with the Bojangles' Summer Shootout - which features NASCAR stars Joey Logano, Austin Dillon and Bubba Wallace among its alumni - running through Aug. 1.