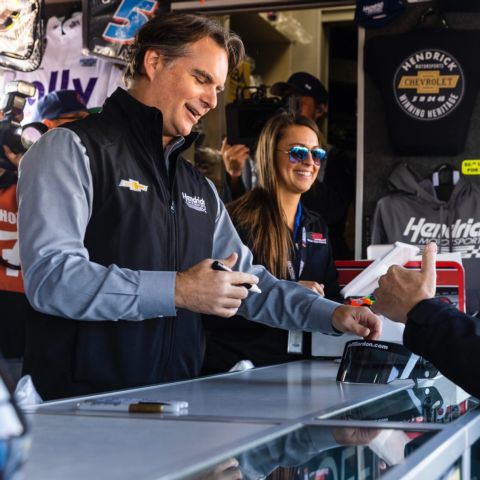 As part of the Bank of America ROVAL™ 400 weekend festivities, fans were treated to several driver autograph sessions in the Fan Zone on Saturday and Sunday.

NASCAR Hall of Famer Jeff Gordon signed autographs for an hour on Sunday at the Hendrick Motorsports souvenir trailer. Fans were lined up eight hours before the session started to make sure they'd get to meet the four-time NASCAR Cup Series champion and Hendrick Motorsports vice-chairman.

Among those fans was Jacob from Jacksonville, North Carolina, who stood in line to get Gordon’s autograph. His first race was Gordon’s last NASCAR Cup Series victory in 2015.

“He was the first driver that got me into NASCAR,” Jacob said. “It was really awesome to get to meet him. This is only my second NASCAR race. This was a really good experience.”

A couple of fans traveled from New Jersey. Dave and Vivian have been fans since the 1980s.

“My daughter Jordan is 28 and pregnant, and couldn’t come to this event,” said Vivian. “She’s been a big Jeff Gordon fan since she was in kindergarten. So, I got the autograph for her. To do this made our whole trip.”

Cynthia and Matthew Humphry made the short trek from Kannapolis, just up the road from Charlotte Motor Speedway. The couple moved from Maine to North Carolina six years ago.

“I have been a fan of Jeff since the beginning,” Matthew Humphry said. “And, I have been a racing fan since I was a kid back in the Bobby Allison days. I think it’s great of the track to have events like this, and we get to have access to the drivers. And just everything that is going on, the environment and all of that, the pre-race is just excellent.”

Kyle Petty was also among the drivers making a Fan Zone appearance, autographing copies of his new book, “Swerve or Die.”

Damon Lester and his son, Joseph, drove down Sunday morning from Damascus, Virginia. Joseph never got to see Petty race, but he and his father loved getting to meet Petty before the race got underway.

“This was an awesome experience,” Damon Lester said. “My first race was in 1993, so I got to see (Petty) drive the Mello Yello car. It’s just a great experience for both of us. It’s amazing the speedway does things like this.”