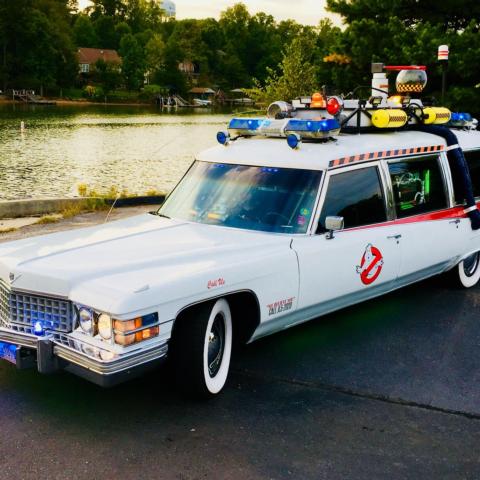 Charge up your proton pack, calibrate the PKE meter and empty all traps into the containment unit, because the April 4-7 Pennzoil AutoFair at Charlotte Motor Speedway will celebrate all things "Ghostbusters" with a visit from an "Ectomobile" spirit transport replica.

When the movie "Ghostbusters" premiered in 1984, it became the highest-grossing film of the year and made a star out of a white-and-red 1959 Cadillac Miller-Meteor ambulance/hearse. The Caddy, known as ECTO-1 or the Ectomobile, was loaded with all manner of spirit-hunting equipment and sported the now-famous "no ghosts" emblem on each front door. A 1989 sequel, "Ghostbusters II," featured an updated ECTO-1a built on a different 1959 Cadillac, while the 2016 reboot, "Ghostbusters: Answer the Call," starred a white-and-pink ECTO-1 built on a 1984 Cadillac.

In the ensuing 35 years, "Ghostbusters" fans from all over the world have been creating their own versions of the Ectomobile. One of the finest examples of an ECTO-1 tribute car belongs to Barrie J. Clark of Fort Mill, South Carolina. Clark and his team spent more than 1,200 hours restoring a 1974 Cadillac Miller-Meteor hearse and outfitting it with a monstrously large 472ci V-8 (for those urgent exorcisms). Clark's ECTO-1, which spends most of its time at charity events, children's hospitals, birthday parties, and parades, is fully equipped with a custom ectoplasm containment system, ecto goggles, and loudspeakers that play the otherworldly warning siren from the first movie. The roof rack is stacked high with wraith-wrangling apparatus, most of which was handmade by Clark's crew.

Clark is a member of the Ghostbusters of North Carolina organization, and the ECTO-1 tribute car acts as a centerpiece for many of the group's public activities. It can often be seen on the streets of Charlotte and surrounding areas, looking for wayward spirits.

During all four days of the April 4-7 Pennzoil AutoFair, the Ghostbusters tribute car will share exhibit space with a motorized Rocket Ship Car carnival ride, a 60th anniversary display of Chevrolet's El Caminos, a collection of Bonneville Salt Flats racers, and a handful of Ridler Award-winning custom machines.