Speedway Children’s Charities Drive-in Movie Night! Bring your family and friends to see “The Secret Life of Pets” on the giant 16,000 square foot Speedway TV on Wednesday night, July 8. Tickets are $30 per Car/SUV/Minivan and all proceeds benefit Speedway Children's Charities. 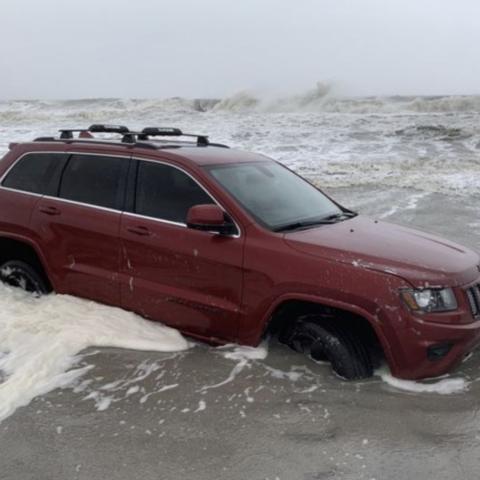 The red Jeep Grand Cherokee of Hurricane Dorian fame is one of the ultimate "must-sea" attractions at the Oct. 17-19 Pennzoil AutoFair at Charlotte Motor Speedway. Courtesy of Nick Feliciano

The red Jeep Grand Cherokee that the whole internet followed as Hurricane Dorian tried to drag it into the ocean will dry dock at Charlotte Motor Speedway's Oct. 17-19 Pennzoil AutoFair.

On Sept. 5, Hurricane Dorian made its way up the East Coast of the United States, hitting Myrtle Beach, South Carolina, with Category 2 winds, brutal waves, and area flooding. As people posted hours of video footage and thousands of photos live from the resort town, the internet took notice of a 2014 Jeep stuck in deep beach sand as the tide rose. Social media channels were abuzz with theories about the hapless 4X4. Did an ex-wife (or -husband) park it in the face of Dorian for sweet revenge? Was it trying to be the first SUV to drive to Bermuda?

Sightseers braved the storm to take selfies with the Jeep even as the Atlantic Ocean pushed it around like a piece of seaweed. Television news crews in town for Dorian coverage stopped by for video clips of the seafaring SUV before its maiden voyage, no doubt hoping to interview its owner. A bagpiper squeezed out the traditional "Amazing Grace" hymn as a funeral dirge, acknowledging that the Grand Cherokee was headed to its grand reward. "Red Jeep" memes based on the films "Castaway" and "Titanic" flew around Facebook and Twitter under #jeepwatch2019. High Point, North Carolina's WGHP-TV website registered 150,000 views of its Jeep footage by the end of the day.

The only two people not following the nautical adventures of the SUV were its owners, Brittany and Nick Feliciano.

"We had loaned the Jeep to my cousin Joey, because the weather had not been safe for him on his motorcycle," said Nick Feliciano, a recently retired U.S. Coast Guard Petty Officer, Second Class. "Joey is more like a brother than a cousin. My kids call him 'Uncle Muscles.' He was going to buy the Jeep from us because our family had outgrown it."

Joey had driven onto the beach, hoping to get some good video of the sun rising over the stormy sea for his SaltyProShop.com website, and became stuck. Doing the responsible thing, he tried contacting several towing services, but none would attempt to free a stuck vehicle on the beach during high tide with a hurricane coming. By the time he phoned the Felicianos with the news, the cops had already been by to ask why their truck was parked in the ocean.

When the sun set that Thursday, many predicted the SUV would drift out to international waters and never be seen again, but it stayed on land and even managed to park upright when the tide went out. Footage of it being dragged behind a Caterpillar backhoe loader was tweeted and retweeted.

Knowing how much accidental joy their story has brought people, the Felicianos have agreed to display the totaled 4X4 during the Oct. 17-19 Pennzoil AutoFair. This "must-sea" attraction will be parked in front of the speedway's Victory Lane during the three-day show. The Jeep is also being used to raise money for Dorian victims in the Bahamas through a GoFundMe.com account, with funds going to UNICEF.

"Our insurance wanted to total it, but they wouldn't let us buy it back because of health reasons," Nick Feliciano said. "We explained the role it played in the hurricane coverage and that our goal was to help the Bahamas through the Jeep's popularity, so the company gave us a year's grace period to use it for that. We are taking the opportunity handed to us to raise money for the families in the Bahamas."

In a NASCAR season marked by historical firsts, the 36th running of the NASCAR All-Star Race will move 159 miles northwest from Charlotte Motor Speedway to the World’s Fastest Half-Mile, Bristol Motor Speedway, for the first time. The July 15 prime-time race will include fans in attendance at a Speedway Motorsports facility for the first time since the onset of the coronavirus pandemic.