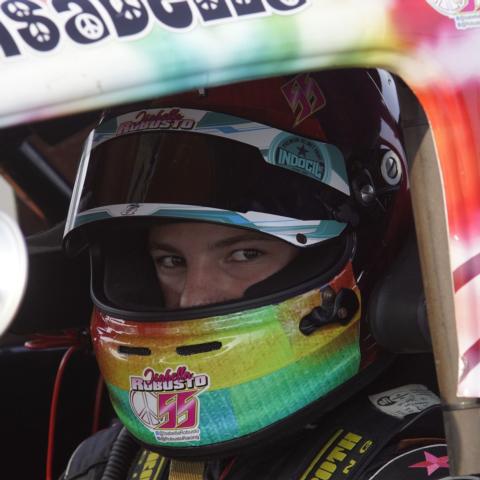 Isabella Robusto is easy to see on and off the track. The 14-year-old Fort Mill, South Carolina, native returned to the Bojangles' Summer Shootout at Charlotte Motor Speedway for her sixth season aboard a tie-dyed WIX Filters Legend Car. She's driven in a tie-dyed car since she was 8-years-old and hopes to run the brightest, most colorful vehicle in NASCAR.

Isabella and her twin brother, Will, invaded the racing industry in go-karts at age 5. They joined a team at age 6 and raced throughout the East Coast for four years. Isabella now drives for Rev Racing, a part of NASCAR's Drive for Diversity Program. She'll compete for the VP Racing Fuels Semi-Pro division title in the Bojangles' Summer Shootout.

There is more to the female Robusto than meets the eye. Aside from racing, she plays three other sports: football, basketball and track. Holding two district records in long jump and high jump, she is also at the top of her game in school.

"Even though I'm racing, I always have a focus on school as much as racing," she said.

Danica Patrick and Kyle Busch are two of Robusto's inspirations on the track, but she looks up to anyone paving their own way. Her brother also pushes her competitive drive in every race.

Don't let first-lap impressions fool you this summer. Isabella takes things cautiously at the beginning of races. Her calculated approach sets her apart from many young drivers.

"As soon there are (10-15) laps to go, I'm focused on hitting every one of my marks, being as consistent as possible, and getting through people as fast as I can," Robusto said.

Her approach paid off at the second feature race of the Bojangles' Summer Shootout on Tuesday. She placed second behind her brother, Will, in the VP Racing Fuels Semi-Pro division.

Fans can follow Robusto's exploits at the Bojangles' Summer Shootout this summer at Charlotte Motor Speedway. On Tuesday, female fans can witness Robusto and a slew of rising stars at the ultimate grassroots racing showcase on Ladies' Night - featuring $1 admission for women. In addition to Robusto and her fellow female competitors, fans in attendance on Tuesday can enjoy a High Heel Dash on the frontstretch featuring NHRA star Angie Smith.