Jordan Black Gets a Hat Trick on a Wild Tuesday Night 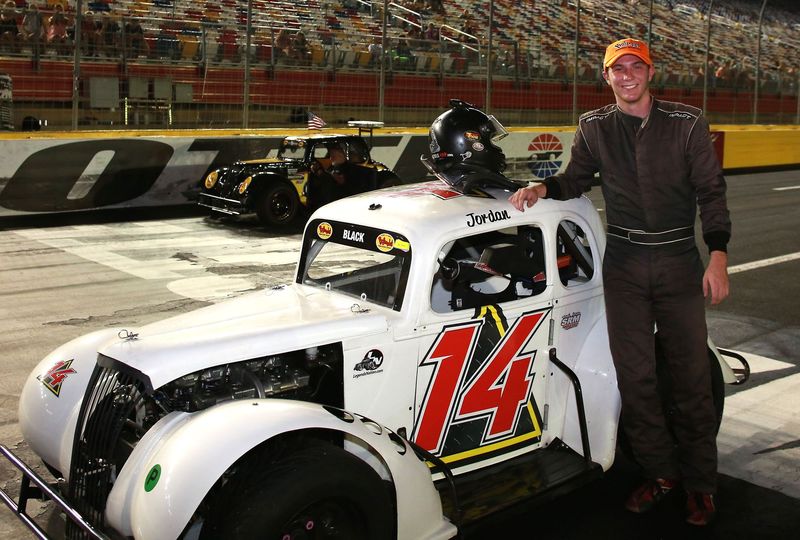 Wheel-to-wheel competition and impressive comebacks were the story of the night in Tuesday's sixth round of Bojangles' Summer Shootout action at Charlotte Motor Speedway.

A quad-racing exhibition among 4 wheelers saw Ben Quinones prevail and claim a $1,000 prize over a field of hard-racing quads, but Tuesday's most exhilarating on-track battles belonged to the Legend Cars.

Jordan Black made it three straight Lead 2 Real Estate Pro division wins in a row, but his drive to another victory on Tuesday was far from easy. The two-time defending division started in Row 3 and needed nearly half the race to crack the top three. Once he cleared Dawson Cram for second, Black caught a break when leader Kaden Honeycutt's lead was erased due to a caution with 10 laps to go.

Black asserted his dominance once the race restarted. He ran Honeycutt down and cleared him within three laps of the restart. From there, Black roared to the checkered flag with a .514-second margin of victory over Honeycutt.

"I've just got great guys around me," Black said. "I never have to worry about the car being off-balance. I'm just a small part of it and people say I'm a good driver but it's all car these days. It was fun coming through the field. A little stressful those last four of five laps."

With luck on his side, Jon Craig passed the leaders as they wrecked on Lap 15 and held on to win the Cabarrus Brewing Masters division race. John Sossoman was a man on a mission as he fought his way to the front of the field after starting mid-pack. Sossoman looked like he was slated to win again with one of the fastest cars in the field, but a mid-race wreck put him to the back of the pack. Craig, who patiently stalked the leaders in third, drove past Sossoman and Carl Cormier's accident and took over the lead on the restart. Sossoman attempted to launch to the front and made it up back bumper of Craig's No. 1C in the closing laps. Craig was able to hold off the point leader to take home the trophy and his first win of the season.

"It was tough. (Todd) Midas was tough and it was just slick," Craig said. "When they all started spinning, I missed it. I knew I just had to hold the bottom line. I felt Sossoman nibble me going into the corner. He raced me clean. He always has."

In a story of redemption, Garrett Manes conquered the VP Racing Fuels Semi-Pro division after a late-race wreck took him out of contention for the win last week. Manes jumped to the front of the field from the drop of the green flag, determined to turn his luck around with a newly rebuilt car. Winning would not be an easy task as Dustin Rumley and Ryan Miller stalked the leader with hopes of winning. In the final laps, point leader Zack Miller challenged Manes for the lead, but was unable to catch Manes, who captured the checkered flag and gained his first victory of the season.

"I can't thank the fans enough for putting this together," Manes said. "A lot of people helped. One girl went on Instagram and Facebook and fundraised for me so I could have enough money to fix my car. I can't thank them enough."

"This is just unbelievable," Hayes said. "We've been chasing one of these for two years. I just buckled down and went my hardest."

Cameron Bolin engaged in a fierce duel for the Bandolero Outlaws win with Justin Gareis, who led the way with four laps to go and Bolin on his rear bumper. Bolin worked lapped traffic to his advantage, cut beneath Gareis in Turn 2 with two laps to go and held off Gareis for the win.

"To get three (wins) in six rounds, that's amazing," Bolin said. "I just hope we can keep this going."