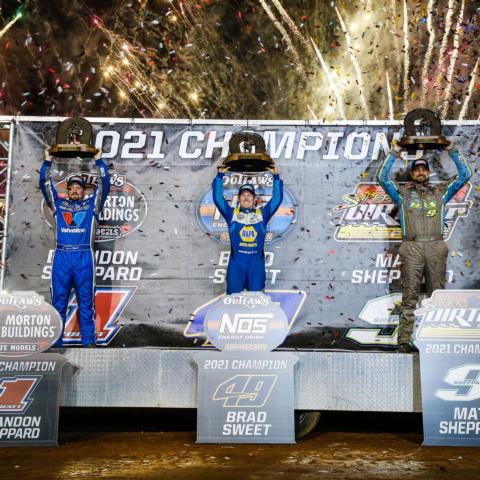 Marks took advantage of a flat tire by leader Logan Schuchart, who led the first 21 laps, and held off Brock Zearfoss in front of a sellout crowd to score his first World of Outlaws NOS Energy Drink Sprint Cars victory at The Dirt Track.

"This is awesome, to be able to win in front of this crowd," Marks said. "I usually struggle here, so we came here and had high hopes for how we've been running this year. Everything's been working out. Right place, right time for me. I knew Logan was better than me, and I just wanted to make sure I finished second. It is just awesome to be standing up here."

Marks' good fortune mirrored Schuchart's misfortune. For the second night in a row, Schuchart suffered a tire failure while in the lead. On Saturday, Schuchart won his heat and followed that up by dominating the DIRTVision Fast Pass Dash.

Schuchart was pulling away in the 25-lap feature before the tire went down in Turn 1. Marks took over and led the final nine laps. Zearfoss earned his first top-five of the season with his runner-up finish, while Donny Schatz rallied from 25th to finish third.

"To end the year finally getting our first top-five of the year – I feel like we should have at least a handful," Zearfoss said. "We were battling for the win there, and I just got a little antsy. I think I might have been able to get a run on him if I'd have hit it right. Just to have an opportunity to win is special for us.

"Happy to be on the podium here in front of this great crowd, a sold-out crowd, it's awesome."

Schatz needed a provisional to even get in the A-Main, but he used the bottom line around The Dirt Track to move through the field.

"It was a good night," Schatz said. "We didn't start out that way. We found ourselves in every bad position: Being on the bottom in the heats didn't help, and same thing in the (last-chance qualifier). We changed everything but the seat, the steering wheel and the driver, and they did a great job. We were able to get up through there and have a respectable finish to end the year."

Series champion Brad Sweet was the fastest qualifier and won a heat race, but had to change a tire in the feature and ended up ninth. Sweet's title, on the strength of 16 victories, was his third in a row.

“It obviously says a lot (to win three in a row)," Sweet said. "There’s a lot of people who work so hard, night-in and night-out, to make it so we can celebrate these moments. We work together really well. We’re a great team. (Team owner) Kasey (Kahne) gives us great equipment. Once you’re on top of that (championship) mountain, you don’t want to get off it.”

Jac Haudenschild closed his stellar Outlaw sprint car career with a 24th-place finish after getting involved in an early-race, multi-car accident.

The other heat-race winners were Friday night's winner, David Gravel, and Carson Macedo.

Davenport swept the weekend in the Late Model class, following up Friday's win with another victory. He passed Garrett Smith with 19 laps to go and held Smith off on a green-white-checkered finish. Smith and Davenport battled earlier in the race, with Smith taking the lead just before a caution with 24 laps remaining. Davenport fought back and retook the top spot on his way to another triumph.

"I gave the lead away," Davenport said. "I was a little too patient with the lapped cars. I just kept trying the top: it got me to third and almost to second on the first lap. Hat's off to my guys one more time. This car here, we've beat it up pretty bad, and it's got a lot of races on it, but she's still pretty good.

"Congratulations to (series champion) Brandon (Sheppard) on his championship. That's a pretty cool deal. Thanks to all these fans for coming out. I love this place. Charlotte's the racing capital of the world, almost. This should be a crown jewel event."

Sheppard, who claimed his fourth series title, won a heat race and finished third. The other heat winners were Kyle Strickler, Smith and Chris Madden. Davenport was the fastest qualifier.

“Our consistency paid off for us and we were able to win the championship," Sheppard said. "I can’t thank my crew enough. Everybody involved with this team who supports me on these long trips, it means the world to me. I always dream big, but maybe never this big, so it’s really cool and I can only hope that my dad and my grandpa, that I made them proud. That’s what it’s about for me. If it wasn’t for my family, I wouldn’t have any reason to do it.”

Hearn added to his spectacular resume by leading all 30 laps of the Super DIRTcar feature. The Charlotte win was his 450th DIRTcar-sanctioned victory and his fifth at The Dirt Track. Plus, it was Hearn's first Super DIRTcar win since Nov. 3, 2018.

"I don't know how it feels, really, to be honest with you," Hearn said. "I've been sitting on the sidelines running a race track. I never really envisioned being back in victory lane because I was so far out of the seat. But as I drove down here, I said, 'If I can't see myself in victory lane, I'll never get there.' I came into tonight visualizing being on this stage, and look, that's what happens."

Sheppard, who celebrated an incredible eighth series crown, reflected on an up-and-down season that ended in successful fashion.

“I don’t know how many races it took to get a top-five, but once we turned the corner, we had a lot of really good finishes to end the year," he said. "We’re just happy to come out of here with a great run tonight and this eighth championship, it’s big. It’s really special.”