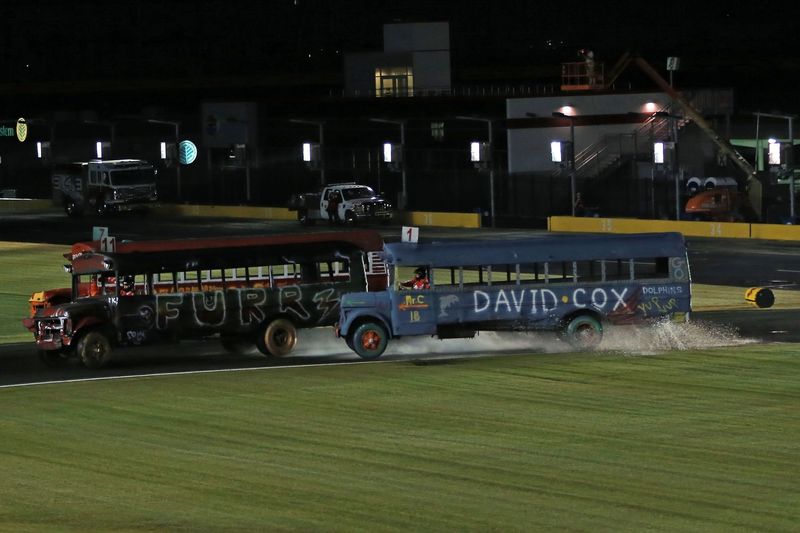 "We were all nervous out there with the rain but thanks to everyone for staying," Copeland said. "We had a lot of fun. This is the first year Charlotte-Mecklenburg Schools has ever won this award so we're excited to be here."

"I just need to get better (at racing) in the rain," Green said. "It was nice to win coming from farther back, though."

During the Cabarrus Brewing Company Masters division feature, Mark Green clinched his first win of the season in a wild, rain-delayed race. Robby Faggart started on the front row after an invert and had his hands full from the green flag with John Sossoman directly behind him. Green, who started third after the invert, stalked the leaders as they battled it out and took advantage of mistakes to launch to the lead. After several cautions and restarts, Green held off Sossoman and Faggart for the victory.

No one was more surprised than Craig Biryla after he stole the victory in VP Racing Fuels Semi-Pro competition. Vincent Midas dominated the race with Wes Burton at his heel, but nobody else in the field seemed to be able to challenge him. Biryla, who started third, claimed the second spot from Burton in the closing laps, but he was running out of laps to try and catch the leader. Only two laps from victory, Midas tried passing a slow car high and ran off the track into the track. Biryla took advantage of the misfortune and collected the win.

"I haven't prepared my victory speech," Biryla said. "This is the most competitive Legend Car racing in the world, so to win here beats anywhere, We're working on moving up the ladder and this is a big step toward that."

Sam Mayer led the way in the early going of the K1 Speed Young Lions feature, but an untimely spin robbed Mayer of a shot at victory. Josh Kossek assumed the lead after Mayer looped his car around in Turn 1, but Kossek lost the top spot soon after when he was involved in a five-car accident on the frontstretch. Harrison Halder took over the point and held off Isabella Robusto in a two-lap dash to the checkered flag.

Monday recap
Green, with sights set on a Lead 2 Real Estate Pro division championship at season's end, began the season with a strong performance and a trip to Victory Lane. Green passed Dillon Faggart on the sixth lap of the 25-lap feature and outpaced Faggart and Jordan Black to claim the early-season win. Ferguson, who was fastest in time trials but started fourth after the invert, and Kaden Honeycutt rounded out the top five.

Todd Midas dominated in a caution-free, action-packed Cabarrus Brewing Company Masters division's season-opening race. After an invert start, international champion John Sossoman, who was fastest in qualifying, started in sixth place, forcing him to fight his way to the front of the pack. Midas, who took the lead on Lap 2, was able to hold off the competitors and create a significant gap by mid-race. Sossoman was able to close the gap, but ran out of time before he could steal the lead. Carl Cormier, Robby Faggart and Bruce Silver rounded out the top five.

The Bandolero Bandits season opener was dominated by Landon Rapp, before Parker Eatmon raced to the lead on Lap 16 and never looked back. Rapp led most of the first 15 circuits, with Leland Honeyman and Eatmon chasing, before contact between heat race winners Honeyman and Eaton opened the door for Eatmon to earn his first win of the season.

TICKETS:
Tickets, which cost only $8 for adults and are FREE for kids 13 and under, can be purchased at the gate or in advance by calling 800-455-FANS or online at charlottemotorspeedway.com.