Due to severe weather conditions in the forecast, Breakaway Carolina has been postponed. Click here to learn more. 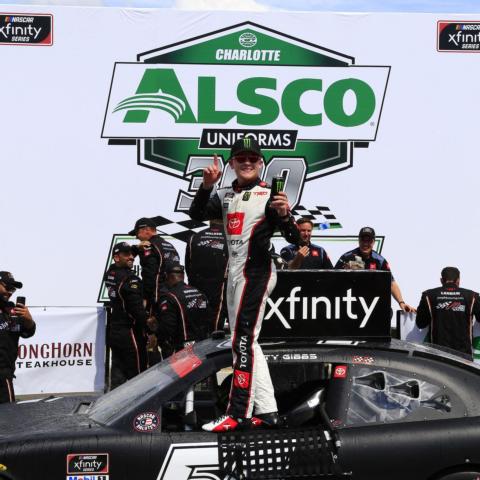 Ty Gibbs' Saturday afternoon at Charlotte Motor Speedway began with a spin and ended with a win in an action-packed Alsco Uniforms 300.

Gibbs muscled his way past race leader Chase Briscoe on Lap 181 after Gibbs' No. 54 Joe Gibbs Racing Toyota took the air off Briscoe's spoiler and sent one of the race's dominant cars into a spin.

The 18-year-old Gibbs — a Charlotte, North Carolina, native and the grandson of car owner Joe Gibbs — led the final 20 laps and scored his second NASCAR Xfinity Series victory in his sixth try.

The final stage was a far cry from the race's second one, when Gibbs pushed up exiting Turn 4 and slid through the front stretch turf without sustaining damage. Gibbs promptly fought his way back into the top five and emerged victorious to score Joe Gibbs Racing's 10th Xfinity Series win at their home track.

Kannapolis, North Carolina, native Daniel Hemric appeared to be JGR's best hope at winning for much of the afternoon.

Hemric took the lead from pole winner Riley Herbst on Lap 8, won Stages 1 and 2 and paced the field for 105 of 200 laps, but a melee with 13 laps to go eliminated Hemric and several front-runners from contention, clearing an easier pathway to victory for Gibbs.

Ty Gibbs, No. 54 Joe Gibbs Racing Toyota (Race Winner): It’s blown my mind that I could get two (NASCAR Xfinity Series) wins (this season). It’s hard for me to calm down and get my emotions in check. I’m definitely going to spend time thinking about it. It’s definitely a great day. Winning in my hometown means a lot. I didn’t think I’d come back (from the spin) and win it. This win definitely ranks pretty far up there for me.”

Austin Cindric, No. 22 Carquest Auto Parts Ford (Runner-Up): “Talking to everyone, it sounds like we were the most boring race car on the race track. We took up residence in P4 for about the entire race. If that meant I had a good restart, a bad restart, a good pit stop, a bad pit stop, we were still P4. I felt like we weren't good enough to make moves to get to the front, but we were good enough to maintain where we were. There's definitely more for us to gain, but overall, we really executed well today. I can't really complain."