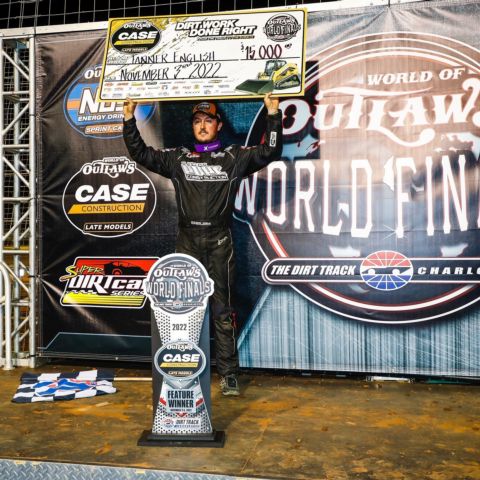 The World of Outlaws CASE Construction Late Models feature a cast of champions and accomplished veterans, but the series’ top rookie took the glory on Thursday’s second night of the World of Outlaws World Finals at The Dirt Track at Charlotte.

Tanner English is considered a rookie by Outlaw Late Model standards, but nothing he did on Thursday made him appear to be a first-timer, as English powered past polesitter Chane Clanton on Lap 1, and led every lap en route to his third triumph of the season.

English – a Benton, Kentucky, native – withstood all comers on a night that saw the rookie start the feature surrounded by many of dirt late model racing’s biggest names in Clanton, Tim McCreadie, Chris Madden and Mike Marlar, Wednesday’s feature winner.

None of the veterans had anything for English, who was determined to pull away from Max Blair in the rookie points battle and the fight for second in series standings. Winning a feature in one of the series’ most important race weekends certainly didn’t dampen his hopes or his spirits on Thursday.

“This car was awesome,” English said. “It was stuck all night. I couldn’t do anything wrong. I could go anywhere on the race track. (Winning the race) is pretty big. This is a pretty big stage and to do it in this town is pretty special. I knew we were pretty good at the beginning of the night. We just had to capitalize on everything.”

The Super DIRTcar Series Big-Block Modifieds began their World Finals weekend on Thursday with an action-packed night of wheel-to-wheel racing.

Canadian Mat Williamson held off a quintet of New York-based drivers in the 30-lap feature, charging from third to first to score his second win of the season.

Anthony Perrego started on the pole and led the race’s first seven laps, before Erick Rudolph took the point with Williamson chasing him down. Williamson needed 12 laps to get by Rudolph, who couldn’t regain the top spot before Williamson took the checkered flag.

Canadian race fans regaled the winner with the Canadian national anthem as he celebrated in victory lane.

“Those fans are awesome,” Williamson said. “It would be cooler if we won a championship again, but Matt (Sheppard) has been unbeatable this year. Hopefully, we’ve learned something the last few weeks that we can carry into next year.”