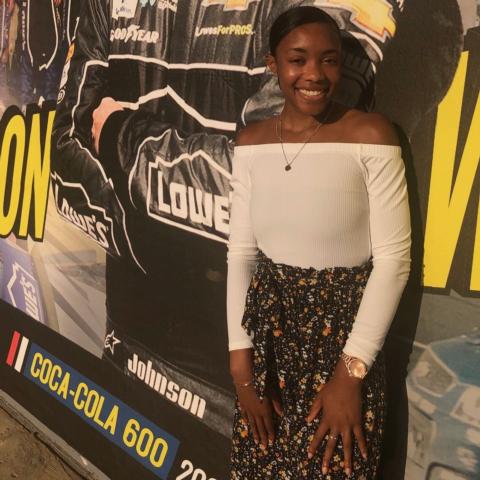 Established in October of 2020 to honor seven-time NASCAR Cup Series champion Jimmie Johnson, the $4,800 scholarship goes to a deserving Cabarrus County high school senior with career pursuits in fitness, nutrition or exercise science. The scholarship will assist one prospective college student per year for the next 10 years.

“Being the first recipient of the Jimmie Johnson Scholarship means a lot to me,” said Hanson, who dined with her family in The Speedway Club after learning she was the recipient. “It reflects on all of the hard work I’ve put in and the hard work I’ll put in in college. I take a lot of pride in being a positive influence in school and in my community.”

Hanson will attend North Carolina Central University in Durham, North Carolina, where she plans to major in kinesiology as an undergraduate before pursuing a master’s degree and a career in athletic training.

“Having Taylor receive this scholarship is such an honor,” said Hanson’s mother, Fannie. “It speaks to how hard she’s worked in school not only to set herself apart from others, but to also have an impact on everyone around her. We’re all very proud of her."