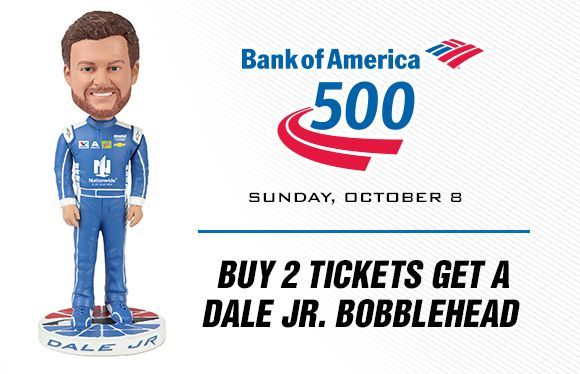 Fans feeling mixed emotions about Dale Earnhardt Jr. making his final Monster Energy Cup Series start at Charlotte Motor Speedway have reason to smile with news of the speedway's latest promotion, which is sure to leave avid supporters shaking their heads in delight.

For every two adult tickets purchased for the Oct. 8 Bank of America 500 - Earnhardt Jr.'s final chance at an elusive Monster Energy Cup series victory at his home track - buyers will receive a commemorative keepsake bobblehead of NASCAR's 14-time most popular driver, while supplies last.

The speedway commissioned the bobbleheads to help fans celebrate one of the sport's biggest names and his career at the famed 1.5-mile superspeedway, where he captured the 2000 NASCAR All-Star Race win in his rookie season and has wowed race fans for nearly two decades since.

"We wanted to do something special to celebrate with our fans all that Dale Jr. means to our sport," said Greg Walter, executive vice president of Charlotte Motor Speedway. "These keepsakes will be a must-have for collectors and avid fans alike, and a tremendous way to commemorate his last home race here in Charlotte."

Qualifying ticket purchasers, including fans who have already purchased tickets, will receive a voucher to pick up their commemorative bobblehead during the Bank of America 500 race weekend. The promotion runs through Oct. 1 or while supplies last.

The Bank of America 500 marks the final start for Earnhardt Jr., a native of nearby Kannapolis, North Carolina who often reminisces about how many of his early childhood memories at the track revolve around watching his father, NASCAR Hall of Famer Dale Earnhardt, race. His grandfather owned a home less than a quarter of a mile from Turn 1 and Earnhardt attended school in Mooresville, North Carolina, dubbed Race City USA.

Despite having already amassed a Hall of Fame worthy career of his own, Earnhardt Jr. has said tasting victory at his home track remains on his bucket list.

This year's Bank of America 500 will return to its original Sunday afternoon timeslot, with a scheduled green flag shortly after 2 p.m. on Oct. 8. Charlotte's iconic 1.5-mile superspeedway hasn't scheduled a daytime Bank of America 500 since 2002, but a return to the traditional Friday-Saturday-Sunday format offers families an unmatched opportunity to enjoy two sun-drenched afternoons of what Earnhardt Jr. said he expects to be action-packed racing.

"You've got a better opportunity for a good race during the day," said Earnhardt Jr. "There's a bit of a science to it - the track surface is hotter, the track is slicker and the groove is wider. You want guys sliding around, having to get out of the gas and able to move around.

Affordable adult tickets to the Bank of America 500, the opening race in the second round of NASCAR's playoffs, start at just $49. Fans can also take advantage of a two-for-$88 special ticket office for the Oct. 8 Bank of America 500. Kids 13 and under get in for just $10. Tickets are availabile online at www.charlottemotorspeedway.com or by calling the ticket office at 1-800-455-FANS (3267).