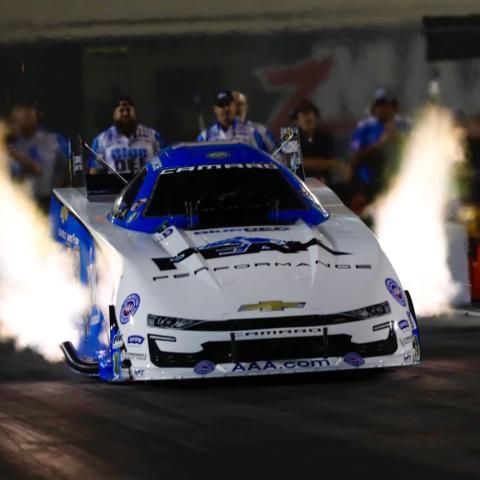 “We were in the back (of the qualifying line), so we could see how everyone went, but it felt good,” said Force, who will go for the zMAX Dragway season sweep on Sunday. “I’m excited to be back here at Charlotte. I like to at least be in the hunt, and I’m in the hunt. (Saturday) is a new day. I’ve got to thank Bruton Smith, Marcus Smith, everybody here at zMAX Dragway. This is an amazing race track. Everybody’s running well on it.”

He wasn’t the only Force to be reckoned with on Friday.

Brittany Force continued the family dominance with a phenomenal 3.662-second, 331.85-mph pass to put the Top Fuel title contender in position for her eighth consecutive No. 1 qualifier result. Force tied her zMAX Dragway-record elapsed time with her first run of the weekend.

“It always feels good to come out with the first run of the night and be No. 1,” she said. “To be able to run like that was pretty impressive for the entire Monster Energy team. There’s a lot on the line in this Countdown and we really want to win, but right now we’re focusing on one run at a time, one win at a time. Eventually, we’ll get there.”

Aaron Stanfield stormed to the provisional top spot in Pro Stock qualifying by a scant .003 seconds over Erica Enders. Stanfield’s 6.575-second pass averaged 208.59 miles per hour, giving the third-generation driver the inside line on his first career No. 1 qualifier honor.

“I got on the radio afterward and said, ‘That was a really nice run,’” Stanfield said. “And, it was. I was a bit surprised it held up, because there are some great cars out there. I can’t say that it will or that it won’t hold up, but I hope it does.”

Steve Johnson’s 6.807-second, 196.47-mph run set the pace in Pro Stock Motorcycle qualifying. Johnson will chase his third victory of the year and second in a row on Sunday.

“(Being provisional No. 1 qualifier) makes us feel really good,” Johnson said. “Our team is just growing. We have people helping us in all sorts of different areas and we’ve got our sponsors here as well. As the team grows, you get confidence in that.”