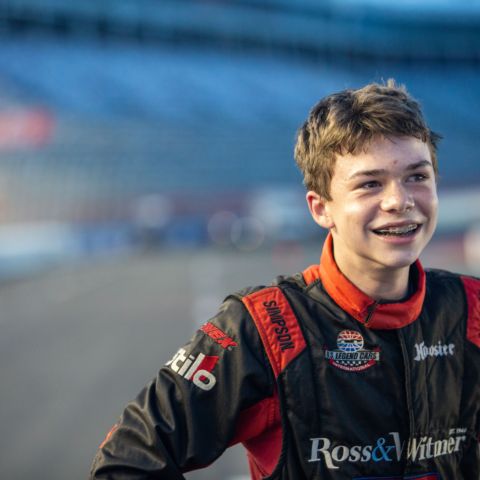 “Jeff Gordon and John Bickford got me in the quarter midgets,” Phillips said.

In his first race, the then 8-year-old George ended up coming from the back. “Once I got into racing, I started loving it and I won my first race there,” George said. “It just felt so amazing and I just love racing now. I got addicted.”

Now, five years later, George is still going full throttle, steering his way around the quarter-mile at Charlotte Motor Speedway, where he now races every Tuesday night in the Cook Out Summer Shootout.

“Without Bruton Smith, nobody would be here,” Meredith Phillips, George’s mother said. “I mean, really, he has made dreams come true.”

“Oh, I love it,” George said. “I'm so grateful to be racing Legend cars, it’s is my favorite thing I've ever driven.”

For George, Smith and Wheeler aren’t just pillars in the racing community, they are George’s friends and role models. “I'm so, so honored to know those two people, what they've done in the sport and what they've done for the Speedway,” George said. “It’s awesome.”

The Bruton sticker on the bumper of the 55, is more than a sticker for George. It’s a nod to the man that helped take him from quarter midgets to legends racing.

“We had taken him to the NASCAR Hall of Fame that morning, and that's all he wanted to do,” Meredith said. “He had a birthday badge on that said something like, it's my birthday and was like, I'm going to tell Mr. Smith, that I went to the NASCAR Hall of Fame and I saw him there, and he's like, what if I could really see him and just take him this piece of cake?” Meredith told him he could try. “He walked down two doors and came back just thrilled to death.”

“Bruton Smith told me to get a legend's car,” George said. The problem with that, he had just turned 11 and you have to be 12-years-old to drive a Legend.

“I think I think they took it pretty good and I just loved Bruton Smith,” George said.

Due to his age, George hopped in a Bandolero car that summer.

“Oh, he played a major role because I wouldn't be at this place right now if it wasn't for Bruton,” George said. “He is amazing.”

This is the second summer in a row for George and his family at the track, competing in the Cook Out Summer Shootout, thanks to one man.

“Oh, more than a million thank you's,” Meredith said. “We've had more fun because of Bruton Smith than we could ever have dreamed of; never knowing that our neighbor, two doors down, would have been such a provider of this.”

“I truly feel like the Lord blessed his life,” Meredith said. “Then because of his life, he has gone and blessed others with it.”

“This is probably one of my best seasons,” George said. In fact, he took the checkered flag in Round 6, getting his first win at Charlotte Motor Speedway.

“Our family has had so much fun because of him,” Meredith said. “I mean, I just think how dull Tuesday nights would be if we didn't have the vision of Bruton Smith to build these tracks and make it possible for kids and it's been so special.”