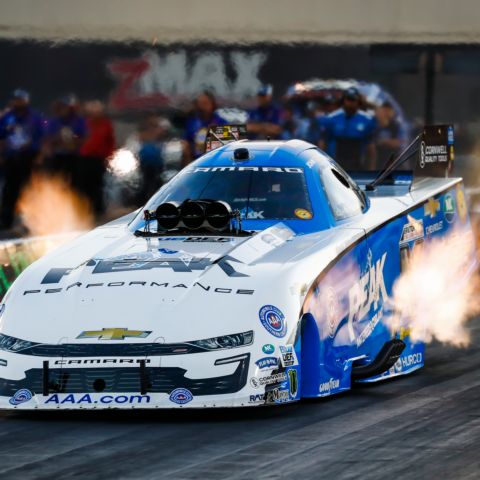 John Force picked up where he left off on Friday at zMAX Dragway.

Force, the winningest Funny Car driver of all time and the most recent winner at zMAX Dragway, earned provisional No. 1 qualifier honors with a scintillating 330.47-mile-per-hour, 3.854-second pass on the first night of the Betway NHRA Carolina Nationals.

Force edged Matt Hagan by 0.007 seconds and 0.48 mph in taking the early lead ahead of Saturday’s second and third rounds of qualifying.

The 16-time NHRA champion also paid tribute to the late O. Bruton Smith, the founder of Speedway Motorsports and a close friend of Force’s throughout his storied career.

“I’m sad to come here without Bruton Smith,” said Force, the winner of April’s NHRA Four-Wide Nationals at zMAX. “I think all the racers feel that way. He’s given us great race tracks and the chance to run numbers like this, but there’s a lot of quick people behind us.

“(The car) moved around a lot past the half-track mark, but I think it was just the new steering we have in the car. We get to shine for one night, at least. At these conditions, (the time) may not hold. Robert (Hight, Force’s teammate, who was third-fastest) is going to be tough. You’ll see people turning up the wick (Saturday). We’ll see what God has in store for us.”

Doug Kalitta led the way in Top Fuel time trials with a 3.694-second, 326.56-mph pass that held up even as contenders Brittany Force and Antron Brown made later runs with slightly cooler weather in their favor.

“I always love coming here, and the conditions were perfect, really, for what we were doing,” Kalitta said. “My guys were confident that it would run what it ran, which was great. It was a great effort for us on the first day, for sure.

“It left straight and my cars really stay in the groove well. It was pulling good and didn’t move around much. Really, with the Funny Car session, too, it was a lot of side-by-side runs. Hopefully, the fans got a good show.”

Four-time Pro Stock champion Erica Enders kicked off her weekend in style, securing the provisional top spot in Pro Stock with a 6.513-second, 210.93-mph pass during Friday’s first round.

“It definitely felt awesome when I let the clutch out, because you can sometimes tell it’s going to be good,” said Enders, who will chase her fourth No. 1 qualifier of the year Saturday. “Our goal coming in is to accumulate as many points as we can. We have five races left, and they’re the most important races of the season.”