The NASCAR All-Star Race has been postponed to a yet-to-be-determined date. Ticketholders for any originally scheduled May NASCAR event should visit Ticket Exchange Information Page for details on event credits/refunds. Our walk-in ticket office remains closed, but customer service agents are available by phone Mon.-Fri. 9a-5p at 1-800-455-FANS or by e-mail tickets@charlottemotorspeedway.com 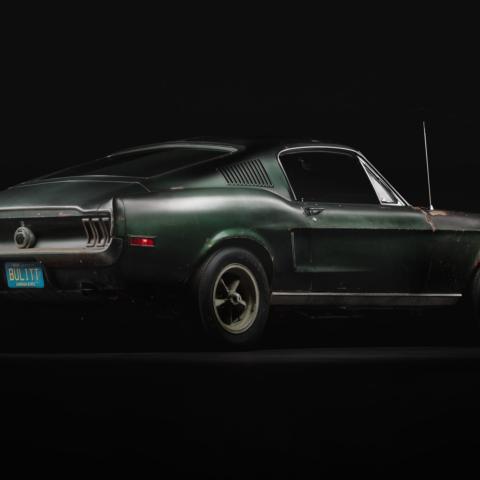 The iconic Ford Mustang that action star Steve McQueen drove in the 1968 film "Bullitt" will be at the Oct. 17-19 Pennzoil AutoFair. Courtesy of Sean Kiernan

By all accounts, the once-lost Ford Mustang that action star Steve McQueen drove in the 1968 film Bullitt is about to become the most valuable Mustang ever to change owners. Before the iconic green fastback makes its short drive across the auction block (and possibly goes back into hiding), car buffs and movie nuts will have a chance to see it up close during Charlotte Motor Speedway's Oct. 17-19 Pennzoil AutoFair.

Two identical Highland Green 1968 Mustangs with 390ci V-8 engines were heavily modified for stunt work in McQueen's Bullitt, a gritty crime movie that famously set a high bar for realistic chase scenes. One of the Mustangs was brutally abused as it jumped hill after hill in pursuit of a black Dodge Charger through the streets of San Francisco. After the chase, that jump car was trucked away as scrap and would reappear as a stripped shell five decades later in a Mexican salvage yard.

The "hero car" that shared much of the screen time with McQueen visible at the wheel sustained only cosmetic damage and was repaired by Warner Bros., after which a studio employee bought it. That first private owner sold it to a police detective in New Jersey, who kept it for four years before his wife persuaded him to sell it and buy a nice, practical station wagon.

Third owner Bob Kiernan and his wife drove the Bullitt Mustang as basic—albeit loud and powerful—transportation. Through 1980, the family used the green fastback as a daily driver and even carried their Great Danes in it. It was taken off the road when Kiernan relocated for work and spent the next 38 years collecting dust in various garages and barns.

In 1989, Kiernan found out from automotive writer Brad Bowling that the entire Mustang hobby had been searching for the surviving Bullitt car with great enthusiasm. Discovering he had a surefire investment on his hands, the owner agreed to work with Bowling on a series of articles about the car in exchange for a promise to keep his identity a secret. (For Bowling's full history about the car and documentation, visit bradbowling.com.)

For the next 29 years, Kiernan watched as Bullitt mania reached a fever pitch. Ford Motor Co. began selling hugely popular movie-edition Mustang GTs in 2001. Everything McQueen ever wore or drove started going for insane prices, such as a pair of Persol sunglasses that brought $70,200 in 2006 and a Porsche 911S he drove in LeMans that sold for $1.4 million in 2011.

Unfortunately, Bob Kiernan passed away in 2014 after bequeathing the world's most sought-after movie car to his son Sean. In 2016, with the movie's 50th anniversary just two years away, Sean let Ford Motor Co. know that he was ready to reveal his identity and the fastback to the public. On Jan. 14, 2018, Ford introduced Kiernan and his car during the North American International Auto Show in Detroit alongside the company's commemorative 2019 Bullitt Mustang model, which was driven onto the stage by McQueen's granddaughter Molly.

Since then, Kiernan and the Mustang have traveled the world, drawing enthusiastic fans in every country they visit. Kiernan recently announced he would be selling the Bullitt Mustang at a Mecum Auctions event in January 2020, making its Pennzoil AutoFair visit one of the last times it is guaranteed to be shown to the public. The highest price ever paid for a collector Mustang was $2.2 million last year for a one-off 1967 Shelby GT-500; hobby watchers think Bullitt could very well double that.